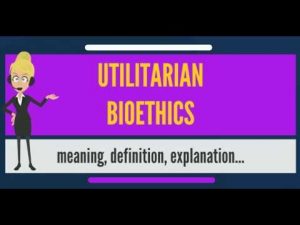 Utilitarian bioethics is a branch of utilitarian ethics and bioethics that recommends directing medical resources where they will have most long-term effect for good.

It is implicitly used in some healthcare planning decisions, such as the use of quality-adjusted life years (QALYs) and the concept of triage, but is controversial in many other cases.

Although utilitarian philosophy traces itself back to the nineteenth century British thinkers John Stuart Mill and Jeremy Bentham, the application of these principles to contemporary bioethics originated in the work of Peter Singer in the 1970s and 1980s. A second generation of utilitarian bioethicists, including Julian Savulescu, Jacob M. Appel and Thaddeus Mason Pope, advanced these arguments further in the 1990s and 2000s. Among applications of the utilitarian bioethic in policy are the Groningen Protocol in the Netherlands and the Advance Directives Act in the American state of Texas.

In the 1990s, a backlash against utilitarian bioethics emerged, led by such figures as Wesley J. Smith and novelist Dean Koontz. 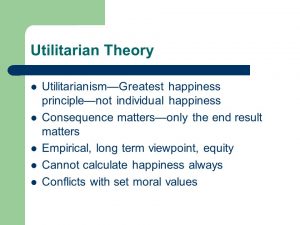 Utilitarian bioethics is based on the premise that the distribution of resources is a zero-sum game, and therefore medical decisions should logically be made on the basis of each person’s total future productive value and happiness, their chance of survival from the present, and the resources required for treatment.

For those whose cost of medical treatment or maintenance outweighs their total future economic value (because they are terminally ill, are no longer productive, and have no reasonable chance of becoming productive or happy in the foreseeable future), it is economically efficient to free up medical resources by not treating them.

As an example of this logic, every nurse who cares for a terminally ill Alzheimer’s or cancer patient, a comatose individual, or an individual in a vegetative state, is one less nurse to take care of a sick baby or a 12-year-old gunshot victim. See opportunity cost. 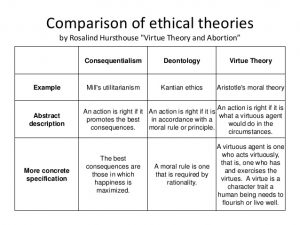 Therefore, the benefits utilitarian bioethics include increased medical expenditure on other patients with a higher chance of survival and return to a productive and/or happy status. This would ideally lead to an overall net increase in wealth and happiness.

The perceived disadvantage of utilitarian bioethics include: potential justifications for physicians to kill patients, a gravitation towards acceptance of mortality and death, lack of medical progress (as the treatment of severe injuries would not be explored), the uncertainty in measuring ‘happiness’, and the possibility of classification of many disabled or old people as “nonpersons”. 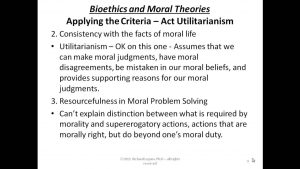