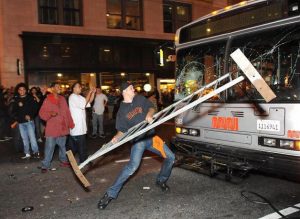 Vandalism is generally defined within the law as the defacement of property by way of any inscribed material, which also includes. In addition, there are also different types of vandalism described by the law. With this type of offence, the elements that determine the type of offence are described within the penal code, which sets out the various offences within the law of a state. When legislators laid down the law, they saw fit to identify certain circumstances in which these offenses, when committed, would occupy a sub-category of its own, due to the seriousness of the consequences of such an act.

Any acts of vandalism that are committed on or near highways or freeways are misdemeanors, regardless of the cost of the damage caused. A conviction under this particular sub-section of the law carries a maximum penalty of six months in a county jail for a first offence and a year for the second and subsequent offences. A maximum fine of $1,000 may also be imposed for acts on or near a highway, and a maximum fine of $5,000 for acts on or near a freeway.