The main difference between fraud and misrepresentation is that, fraud is done with an aim of deceiving others, which is not in the case of misrepresentation. And, so misrepresentation does not entitles the agrieved party cannot sue the other party for damages but can avoid the contract. conversely, fraud entitles the aggrieved party to avoid the contract and also file a suit against other party for damages. Go through, with the article presented to you, to know some more differences between these two.

A false representation willfully made by a party to contract in order to mislead the other party and inducing him to enter into the contract is known as fraud.

The party making false representation has made it either knowingly or negligently just to deceive the other party. The aggrieved party, relied on the statement, believing it to be true and acted upon it, which became a cause of loss to the aggrieved party. In addition to this, the representation of the fact must be made before the conclusion of the contract. Concealment of a material fact in a contract also amounts to fraud, but mere silence does not amount to fraud except where the silence is equivalent to speech or where it is the duty of the person making the statement to speak.

Now the contract is voidable at the option of the aggrieved party, i.e., he has the right to perform or terminate the contract. Apart from that, any damages suffered by the injured party can also be claimed as well as he can sue the other party in court.

Example: A purchased goods of Rs. 5000 from a shopkeeper B, with the intent of not paying the money to B, this type of act amounts to Fraud.

Now, the contract is voidable at the option of the injured party who has the right to avoid his performance. Although, if the truth of the material fact can be discovered by the aggrieved party in the normal course, then the contract is not voidable.

Example: A says to B to purchase his car which is in a good condition, B purchased it in good faith but after a few days, the car did not function properly and B has to suffer a loss to repair the car. So the act amounts to misrepresentation as A believes that the car works properly but this is not so. 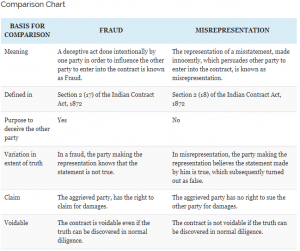 Key Differences Between Fraud and Misrepresentation

The major difference between fraud and misrepresentation are as under:

Hence, there is an absence of free consent in both the conditions whether it is fraud or misrepresentation that is why the contract is voidable at the option of the party whose consent was so caused.