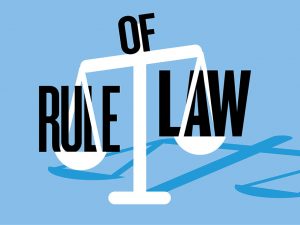 Welcome to the first lesson of the third topic in this module guide – The Rule of Law! How the rule of law is defined and protected is subject to a great deal of debate, although it is generally accepted that the rule is an essential part of an effective constitution. At the end of this section, you should be comfortable understanding how the rule developed, in what areas there are matters of contention, and how the rule manifests (or should manifest) itself in the UK.

This section begins by introducing the rule and outlining the history of its conception. It then goes some way to pinning down the main aspects and arguments for its specific definition, and whether the conception ought to follow a content-free or content-rich model. The section talks about whether the rule of law has been a useful concept, and how judicial interpretation of the rule has influenced its manifestation in the United Kingdom. There finally then further discussion of the intersection of the rule and the United Kingdom.

The ‘rule of law’ is widely accepted to be a critical part of an effective constitution; its principle function is to constrain government action. There is a significant disagreement initially on how to define the rule of law. 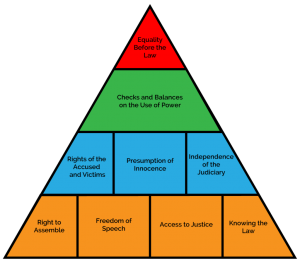 A. The History of the Rule of Law

In the late Roman period, the view was established that royalty was above the law and subject only to the law of God and not to other men. The path to the institutionalism of the rule of law advanced and then at times was weakened. The Magna Carta 1215 enshrined the principle that the King was not above the law. Barons demanded that King John accept the Charter after a period of domestic unrest due to the King’s focus on foreign war and his raising of taxes to finance the war with France.

In Prohibitions del Roy (1607, published 1656 (1572-1616 12 Co Rep 63) Sir Edward Cooke asserted that the King could not act as a judge using his own reason to reach decisions, but should be tried by judges who applied the law to the facts.

The right of Habeas Corpusis an essential feature of the rule of law, and is not explicitly mentioned in the Magna Carta but subject to much future legislation. It matured in legal terms in the Petition of Right. It requires a detainee to be brought before the court, so the legality of their detention can be determined and if not, the prisoner must be released.The Habeas Corpus Act 1679 specifically legislated for the fact that a detainee was entitled to be brought before a court to subject his or her detention too judicial and hence legal scrutiny.

The Bill of Rights 1689 stated that law could not be made, repealed or suspended without the will of Parliament. The Crown could not manipulate the court system, and subjects were now able to bring an action against the Monarch. The Monarch and courts could not subvert the requirements of habeas corpus. The Bill also sets out the basic and fundamental principles that determine the operation of the rule of law.

The scope of the rule of law remained vaguely defined during this period.

B. Defining the Rule of Law

Throughout the 20th century, the rule of law has become a term of widespread academic debate, court judgments and parliamentary debates. It is referred to in section 1 of the Constitutional Reform Act 2005, the preamble to the European Convention on Human Rights 1950 and the preamble to the Treaty on European Union.

‘The core of the existing principle is … that all persons and authorities within the state, whether public or private, should be bound by and entitled to the benefit of laws publicly and prospectively promulgated and publicly administered in the courts’.

There remains a number of important questions regarding the ‘rule of law’, one important one being whether it should be content free or content rich?

Joseph Raz, ‘The Rule of Law and its Virtue’ (1977) 93 Law Quarterly Review, 195, 210-11, argues that the rule of law is a negative concept, which is merely designed to minimise the harm to freedom and dignity which the law may create in the pursuance of its goals. A content-free concept of the rule of law thus does not specify what the substantive rules should be, just that the process of the creation of law should be carried out with procedural fairness.

A content-free rule of law takes no account of social inequalities. As stated by Anotole France in Bon Mot ‘The law in its majestic equality, forbids the rich and poor alike to sleep under bridges, to beg in the street, and to steal bread’. When the rule of law is applied in this content-free manner, it creates procedural fairness, while the law still functions to preserve inequalities.

C. Dicey and the Rule of Law

Sir Ivor Jennings (1903-1965) was a Fabian socialist who criticised Dicey’s work arguing that it failed to deal with the powers of government. Dicey’s focus was only upon tort law and not public law

Despite his critics, Dicey’s three propositions are still highly influential and referred to by judges in the 21st century.

D. Is the Rule of Law a Useful Concept?

John Griffiths (1918-2010) ‘The Political Constitution’ (1979) 42 Modern Law Review, 1, 15; The Rule of Law has a correct function in ensuring that public authorities do not exceed their powers and that criminal offences are dealt with in a fair and just manner; but the concept has also been misused to preserve legal and political institutions, which are no longer relevant.

Martin Loughlin, The Rule of Law in European Jurisprudence’ Study 512/2009 (Venice Commission 2009). Since law is acknowledged to be a human creation, it cannot be placed above the human intention. Laws themselves do not rule, since ruling requires action and laws cannot act. The rule’s main strength is as an aspiration, but it must be recognised that its direction remains an essentially political task.

Each country has its own institutions, which protect the rule of law; in the UK, this is done so by the three branches of government: The Judiciary, Parliament and the Government.

E. Judicial interpretation of the rule of law

The courts have interpreted the rule of law through a selection of cases that have examined the legality, the irrationality or the procedural impropriety of the actions of the executive or public bodies, or whether their actions conform to the Human Rights Act 1998. The main principles of the rule of law, along with judicial interpretation are considered here.

i. No one must be punished by the state except for a breach of the law:

ii Government under law; equality before the law:

vi The rule of law and substantive judgments:

F. The UK Legal System and the Rule of Law

Arbitrary and wide discretionary powers: Statutory provisions often afford public bodies the discretion to act in ways they consider to be reasonable. This discretion can be wide and arbitrary, which provides a threat to the rule of law.

Privileges, immunities and the rule of law: Equality before the law is potentially undermined by special powers, privileges and immunities from ordinary law that Parliament has granted.

The judicial extension of the criminal law: Dicey argued that ‘a man may with us be punished for a breach of law, but he can be punished for nothing else’; hence the courts should not be able to extend criminal offences laid down by parliament.

The following are some example essay questions, which you may find in an exam regarding the topic on the Rule of Law. Good answers should include reliance on a variety of arguments for and against a particular line of reasoning and show evidence of reading beyond lecture notes or a single academic textbook. Unlike other law topics, this one is fairly theoretical and hence various arguments based on legal scholarship should be revised in order to answer a question about the Rule of Law.

Q1 Outline the historical origins of the rule of law

Q2 Outline Dicey’s key features of a legal system based on the rule of law, consider criticisms of his theories.

Q4 Consider how judges have interpreted the principles of the rule of law, with reference to recent case law