Mediation is more time saving than litigation. It is a quick process involves the coming into a mutually acceptable agreement to settle the dispute by both sides of the parties. The mediator, who act as the middleman of the disputed parties helps the parties to reflect the benefit concerned by the parties to each other in a private and confidential manner. The whole process, from the application of the mediation to the settlement usually will not take a very long time. Unlike mediation, litigation involves much cumbersome procedure. Besides the cumbersome procedure, litigation involves a lot of legal issues which take time for the court to resolve. Most of the time, a civil case in the ordinary court will take up to at least few years. So, if the disputed parties were to seek for a quick resolution for their particular disputes, they should choose to utilize mediation.

Besides, mediation is also more cost saving than litigation. The charge for mediation service is lower as the time consumed for the settlement of dispute is shorter. The time-dragging trial in an ordinary court consumed a lot of lawyer charge. Moreover, some of the mediation services provided are free of charge, particularly those provided by Malaysian Mediation Centre (MMC).

Mediation also gets the parties to reach a more mutually satisfied settlement. With facilitation of the mediator, both the parties in dispute will raise their concern about their benefit to the dispute to each other. As such, the resolution will be reached upon with compromise and that the possibility not to conform to the agreement settled is lesser. 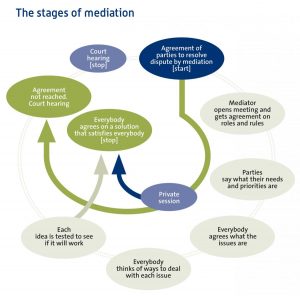 Mediation helps to mend broken relationship between disputed parties. Unlike in litigation, there is a win-win situation in mediation when there is an agreement reached. This is because the agreement is settled by compromise made by both the parties rather than the one-sided judgment made by judges in the ordinary court. In the case of a litigation involving closely related parties such as family members, relatives and employer-employee, the losing party tends to draw a clear line with the winning party. This in turn will not happen in mediation.

Agreement reached under mediation is not binding and final but merely a mutually agreed settlement made by both the parties under the facilitation of the mediator. Indeed, the mediator does not provide any legal advice or any suggestion to the parties. The parties are not bound to comply with the agreement and the party who changed their mind not to accept the resolution reached may bring the dispute into litigation. This in turn, defeated the purpose of mediation to help to clear out backlog of cases in the judiciary. 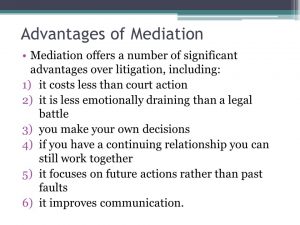 Mediation offers a number of significant advantages over litigation, including: it costs less than court action. it is less emotionally draining than a legal battle. you make your own decisions. if you have a continuing relationship you can still work together. it focuses on future actions rather than past faults. it improves communication.

Reasons for backlog of cases in the court 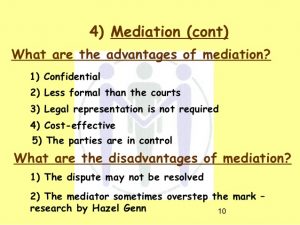 Another reason is that litigation involves long and cumbersome procedure. At the pleading stage, it usually consume more than 2 months, which involves consultation with lawyers, filing of statement of claim, ground raising to dismiss the claim, answer to the statement of claim. The respondent could raise several grounds to dismiss the claim, could appeal to the rejection of his grounds, to answer to the claim and to counterclaim the plaintiff. All this procedure would take months to complete. Afterwards, there are pre-trial stage, trial stage, and judgment stage. In the pre-trial stage, there would involve the disclosure and exchange of evidence by both the parties which would take a few months too. It is worse at the trial stage that because any of the party can apply for reset of trial date to drag the case. All of the above mentioned, especially the dragging of the trial date by the parties cause many cases to accumulate in the court. 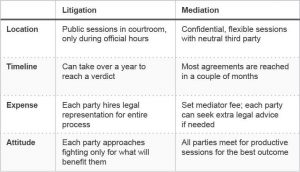 Hesitancy and Uncertainty of Parties at the Point of Agreement

Mediation is a voluntarily process, parties need to have mutually consent in resolving their matter. The resolution agreement reached between the parties is documented in a ‘black and white’ form, it is a binding and legally enforceable agreement in most judicial systems. However, no lawyers normally present at the moment the parties enter into such agreement, although it should be discussed with a lawyer prior to mediation. Absence of their respective lawyer might lead to hesitancy and uncertainty of the parties in signing the agreement without having their lawyer first review it.

A judge is like a referee in a game, his Lordship ensures both sides of the players to follow the rules and regulation according to the facts and law, notwithstanding who they are- even the party involved is a King of the nation, He is still subject to law for His wrong done. Most people want to settle their dispute via litigation, the only reason in doing so is they want a fair decision to come from a judge, whom they deem impartial, neutral and independent. Unlike in litigation, mediator may not reviews each side of the case by referring to judicial precedent laid down by the courts of higher authority, seeking out the underlying principle and rationale of cases with similar facts, and coming out with a just and legally recognized decision as a judge do, a mediator is merely an outside party without authority and has no right in making decision.

Question on Neutrality and Impartiality of Mediator

A mediator is usually an outsider of the parties in dispute, with two main characteristics i.e. neutrality and impartiality. But, who knows a mediator is really an outsider? He or she may be friends or enemies with one or both parties, this result in a difficulty in ousting favouritism in mediation process. Furthermore, if one party is in dominant relationship with a mediator, the other party may feel suppress in expressing what he or she indeed concern. 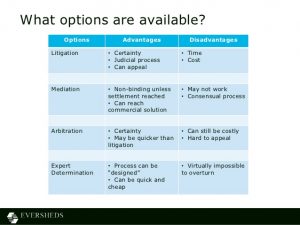 In a settlement of financial issue, a mediator may not have legal knowledge and resources to carry out investigation on hidden information such as hidden assets and income, which can be duly done by a lawyer. If mediation fails, the parties may not only have wasted too much time and money on the process and but still have to dump money for a court trial.

Either Party Can Withdraw

Another disadvantage of mediation is that either party can withdraw from the process at any time they wish. Unlike in litigation, the only party that can withdraw the complaint and end the whole matter is the plaintiff, if they drop the suit against the defendant. In other words, if the mediation process is not made in favour of a party in default, they can simply withdraw from the entire proceedings.

Another drawback to mediation is that it cannot totally solve domestic violence. Once an issue has been brought to court, there is no way out but to let the issue being publicised to the whole world. Most people are more willingly to keep privacy to their family dispute, and it is when mediation can come into assistance. Parties would like to settle such dispute peacefully without bringing it to court. Unfortunately, this has provided a chance for the abuser to act violently on the victim again, for nobody- including the mediator, can actually intimidate the abuser from doing so, unless he or she is made punishable via litigation.

Got one question to ask!! Is the agreement reached in mediation is binding??

It depends upon the content of the agreement. The agreement may constitute a contract, in which case it could be legally enforced (with an appropriate expenditure of time and money). In most cases the people who signed the agreement would need to take action to enforce it; no public body is monitoring its implementation. Talk to a lawyer if you have doubts or questions about legal issues. It is rare for parties not to fulfill their agreement without a good reason. In many mediated agreements, a clause is included that indicates how these difficulties and any future disputes will be resolved. The need for fine-tuning and dealing with unforeseen problems can always arise with any agreement.