There is an old statement, “All contracts are an agreement, but all agreements are not contracts” which implies that agreement is different from a contract. Without knowing the fact, we enter into hundreds of agreement daily, which may or may not bound us legally. Those which bind us legally are known as a contract, while the rest are agreement.

In this way, the Indian Contract Act came into force, which was enacted by the British Government because at that time they were ruling on India. The act gives a base to all the agreements and contracts. This act was applicable in all over the country except in the state of Jammu & Kashmir.

When a person (promisor) offers something to someone else (promisee), and the concerned person accepts the proposal with equivalent consideration, this commitment is known as the agreement. When two or more than two persons agree upon the same thing in the same sense (i.e. Consensus ad idem), this identity of minds is agreement. The following are the types of agreement are as under:

It can also be defined as the contract which lacks enforceability by law is known as the agreement.

To be precise, a legally enforceable agreement for doing or not doing an act is known as a contract. A contract must contain these elements: Offer and Acceptance, Adequate and Unconditional Consideration, Free Consent, Capacity, Lawful object, Certainty, Intention of creating legal obligations, and the Agreement should not be declared void.

The contract may be oral or written. The major types of contract are as under: 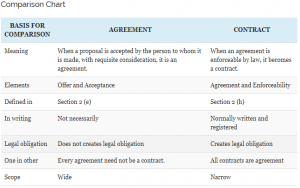 Key Differences Between Agreement and Contract

The points given below are substantial so far as the difference between agreement and contract is concerned:

At the beginning of this article a question is asked whose answer is here, i.e. only the legally enforceable agreements are contracted means they must have a consideration, a lawful object, the parties makes their consent freely, they are competent to contract, and the agreement is not declared void. If any one of the above conditions does not satisfy, the agreement will cease to become a contract. Therefore, it can be said that all agreements are not contracts.