The exact extent of the role that drugs and alcohol play in the commission of crimes in the United States is probably impossible to determine, but it is obviously significant according to data from a variety of government sources.

Although victims of crimes report that they believe the offender was under the influence of alcohol or drugs is less than half of the violent crimes, drug tests from those who are actually arrested for crimes show a much higher percentage drug usage.

Sometimes drugs and alcohol play a role in criminal activity even when the offender is not under the influence at the time the crime is committed. Many offenders commit crimes in order to get money to obtain drugs.

When you add up the crimes committed because of the influence of alcohol or drugs, drug-related criminal offenses, and crimes in which illegal possession of the drug itself is the crime, the role of alcohol and drugs in crime is extensive.

Victims’ Perception of Offenders’ Drug and Alcohol Use

The U.S. Bureau of Justice Statistics collects data from victims of violent crimes about whether the victims think that the offender was using drugs or alcohol during the crime. According to the perceptions of the victims, offenders were under the influence during the commission of these crimes: 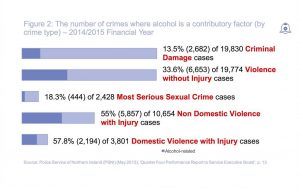 Information collected by the National Institute of Justice through its Arrestee Drug Abuse Monitoring (ADAM) program tells a different story of drug use among offenders.

The ADAM data provides objective, biological measures of drug use along with the self-reported use among those arrested and charged with crimes and provides a method to monitor trends in drug use among offenders.

Here are some of the highlights from the most recent ADAM II data collection in 2013:

An estimated 17 percent of state prisoners and 18 percent of federal inmates reported that they committed the crimes that they are currently incarcerated to obtain money to buy drugs.

Those who do commit crimes to obtain money for drugs are more likely to commit property crimes and drug offenses (trafficking) than they are violent crimes and public order offenses.

Among jail inmates charged with property crimes, these percentages of arrestees reported being under the influence of drugs at the time of the crime:

Officials estimate that 1.5 million drivers per year are arrested for driving under the influence in the United States. That translates to 1,250 arrests for every 100,000 drivers.

Drivers are legally alcohol-impaired when their blood alcohol concentrations (BACs) are .08 grams per deciliter (g/dL) or higher in all 50 states and the District of Columbia.

Within NHTSA reports, the term “alcohol-impaired” does not indicate that a crash or a fatality was caused by alcohol impairment, only that an alcohol-impaired driver was involved in the crash.

The 9,967 people who died in alcohol-impaired-driving crashes in 2014 included:

Someone Dies Every 53 Minutes in Alcohol-Related Crashes