Bangladesh received more than 655,000 Rohingya refugees who were forced out of Myanmar’s Rakhine State. Members of the opposition Jamaat-e-Islami were arbitrarily arrested. Human rights defenders were harassed and intimidated. The rights to freedom of peaceful assembly and association remained restricted. Enforced disappearances persisted. The strategy to combat violence by armed groups continued to be marked by human rights violations. LGBTI people continued to be harassed and arrested. Security forces in the Chittagong Hill Tracts failed to protect Indigenous people from violence. On a positive note, a decade of steady economic growth helped to reduce extreme poverty. 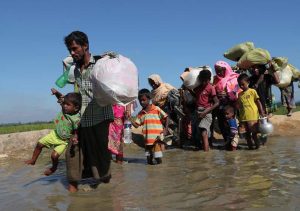 Attacks against journalists continued, with a number of physical assaults on journalists reported, including the killing of Abdul Hakim Shimul.

The government continued to use repressive laws to unduly restrict the right to freedom of expression, and to target and harass journalists and human rights defenders. Key punitive provisions of the Information and Communications Technology (ICT) Act remained intact, despite repeated calls by human rights mechanisms to repeal its abusive clauses. The government reiterated its intention to introduce the Digital Security Act, which would restrict further the right to freedom of expression online.

Investigations into killings during 2015 and 2016, which were claimed by the armed group Ansar al-Islam and targeted secular activists, were still ongoing. The group was banned in March 2017 but ongoing delays in criminal prosecutions continued to have a chilling impact on civil society.

LGBTI activists continued to be routinely harassed and subject to arbitrary detention by state and non-state actors. The killings of activists in 2016 by Ansar al-Islam intensified existing fears of the LGBTI community; many activists remained in hiding. In May, 28 men believed to have been targeted for their perceived sexual orientation were arrested in Keraniganj, a neighbourhood of the capital, Dhaka, and charged with violating the Narcotics Control Act 1990. The arrests were made at a regular gathering known to be frequented by gay men.

No one was brought to justice for the 2016 killing of LGBTI activists Xulhaz Mannan, Mahbub Rabbi Tanoy, Avijit Roy and Niladry Niloy, although at least one arrest was made in 2017.

The right to freedom of peaceful assembly continued to be severely restricted. Political opponents were denied the right to organize campaign meetings and political rallies.The activities of NGOs continued to be restricted through the Foreign Donation (Voluntary Activities) Regulation Act.

Enforced disappearances were routinely carried out by security forces, mainly targeting supporters of the opposition. Some of the disappeared were subsequently found dead. In a statement to the authorities in February, the UN Working Group on Enforced or Involuntary Disappearances said that the number of enforced disappearances had risen considerably in recent years. Reports suggested that more than 80 people were forcibly disappeared during the year.

In March, Hummam Quader Chowdhury, son of an executed leader of the opposition Bangladesh Nationalist Party, was released after six months’ incommunicado detention. Concerns increased for the safety of Mir Ahmad Bin Quasem and Abdullahil Amaan Azmi, also sons of executed opposition leaders; they disappeared in August 2016 and their whereabouts remained unknown at the end of 2017. In April, Swedish Radio published an interview – recorded undercover – in which a senior member of the Rapid Action Battalion described how the unit carried out enforced disappearances and extrajudicial executions. In October, academic Mubashar Hasan was allegedly abducted by members of military intelligence; he returned home after 44 days.

Concerns increased about the growing interference by the government in the judiciary. In July, the Chief Justice presided over a ruling overturning a controversial constitutional amendment (16th Amendment) which allowed parliament to impeach judges if charges against them of misconduct or incapability were upheld. The Prime Minister criticized the Chief Justice after the ruling. Subsequently in November, Chief Justice Sinha resigned from his post and left the country under circumstances that indicated executive interference following the 16th Amendment decision.

An acute humanitarian crisis began in August when more than 655,000 of Myanmar’s mainly Muslim Rohingya fled to the district of Cox’s Bazar after fleeing violence inflicted by the Myanmar military in northern Rakhine State. The Myanmar military’s campaign of ethnic cleansing amounted to crimes against humanity under international law (see Myanmar entry). Cox’s Bazar already hosted approximately 400,000 Rohingya refugees who had fled earlier episodes of violence and persecution at the hands of the Myanmar military.

Bangladesh continued to refuse to formally recognize Rohingya as refugees. Reports of severe malnutrition were rife; children comprised 61% of the new arrivals and were particularly affected.

Rohingya women and girls were at heightened risk of sexual and gender-based violence and human trafficking, both by the local population and other refugees. Risk factors included inadequate protection or camp management mechanisms, poor living conditions, lack of a civil administration and police presence, as well as lack of access to the formal justice system and other services. Newly arrived Rohingya lived in squalid conditions and were not permitted to leave the camp.

In November, the governments of Bangladesh and Myanmar signed a repatriation agreement to facilitate the return of newly arrived Rohingya to Myanmar. The conditions of the agreement could violate international standards on voluntary repatriation and the international legal principle of non-refoulement, paving the way for forcible return of hundreds of thousands of Rohingya to Myanmar where they were at serious risk of human rights violations.

Torture and other ill-treatment

Torture and other ill-treatment in custody remained widespread and complaints were rarely investigated. The 2013 Torture and Custodial Death (Prevention) Act continued to be inadequately enforced due to a lack of political will and awareness among law enforcement agencies.

Scores of people were sentenced to death and executions took place.

In April, two people were sentenced to death after being convicted of crimes against humanity by the International Crimes Tribunal, a Bangladeshi court established to investigate the events of the 1971 independence war. The Tribunal also concluded the hearing of arguments in the trial of six alleged war criminals in Gaibandha for mass killings, abductions, looting and arson during the 1971 war. The trial remained ongoing. Serious concerns regarding the fairness of the trial were raised about the Tribunal proceedings, such as denial of adequate time for defence lawyers to prepare their cases and arbitrary limitation of the number of witnesses.

In June, at least one person was killed and hundreds of homes were burned during a mob attack on Indigenous people in the town of Langadu, Rangamati Hill District. Police and soldiers reportedly failed to protect Indigenous villagers. Those made homeless had not been rehoused by the end of the year. A video posted on social media appeared to show soldiers using excessive force against students peacefully protesting against the violence and the 1996 disappearance of Indigenous rights activist Kalpana Chakma. Mithun Chakma, an Indigenous rights campaigner, denounced a “situation of suffocation” in which he was forced to attend court up to eight times a month to answer criminal charges relating to 11 separate cases, some of which were under the ICT Act and concerned articles he had posted on social media about human rights violations, thus preventing him from carrying out his work as a human rights defender.