Every country’s constitution enforces certain laws, for the purpose of maintaining order and protecting the society from crimes. These laws are broadly classified into two categories, i.e. Civil Law and Criminal Law. The Civil law lays emphasis on resolving the dispute like family dispute, rent matters, disputes relating to the sale and so forth. On the other hand, Criminal law stresses on punishment to the offender, who breaches the law by acts such as, murder, rape, theft, smuggling, etc.

Civil law, plays a crucial role, as it resolves most of the private matters, that happen to individuals. Conversely, the criminal law holds dominating positions among the social control agencies, as it is a powerful tool which is used to protect the public interest against anti-social conduct. Take a read of the article given below, to understand the difference between civil law and criminal law.

Civil law alludes to the system of rules and regulations, which describes and safeguards the rights of the residents of the country and provides legal remedies to a dispute. It includes cases relating to private matters such as property, contracts, torts, family dispute, etc.

The party who files the suit is called plaintiff, while the party who responds to the suits is known as a defendant and the entire process is termed as litigation.

The basic objective of the civil law is to seek redressal of the wrongs, by imposing compensation on the wrongdoer rather than giving punishment. The wrongdoer bears only that extent of the damages, which are required to make good the wrong done to the aggrieved party.

Criminal Law can be understood as the set of rules and statutes, that highlights the conduct or act prohibited by the state, as it violates the intention of the law, threatens and harms public and welfare safety. The law does not only defines the crimes but also specifies punishment to be imposed for the commission of a crime.

The primary objective of criminal law is to penalize the person who committed a crime, for the purpose of communicating a message to him/her and the entire society, not to commit the crime, or else, the act they commited will attract retribution.

When one commits an act, which is not permitted by law, he/she risks prosecution. In criminal law, firstly the complaint is registered with the police, regarding the crime, after which the police investigates the crime and files criminal charges. The aggrieved party can only report a crime, but the charges can only be filed by the government, who is represented by the prosecutor in the court of law against the defendant.

In India, the Criminal Law is broadly classified into three major acts, which are Indian Penal Code, 1860, Code of Criminal Procedure, 1973 and Indian Evidence Act, 1873. 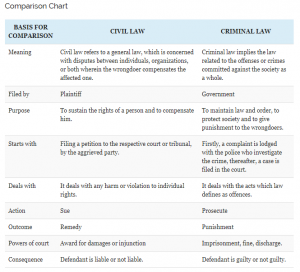 The differences between civil law and criminal law can be drawn clearly on the following grounds:

As we all know that the two types of law are made to serve a variety of purposes. Civil law is primarily created to settle disputes and provide compensation to the aggrieved party. On the contrary, the criminal is aimed at preventing undesirable behavior and give punishment the ones, who commit such acts, which are prohibited by the law.