A company is an artificial person created by law 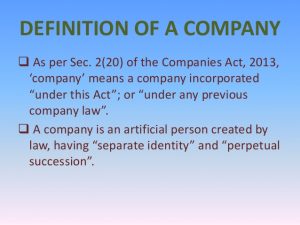 The incorporation of a company is an artificial entity recognized by the law as a legal person that exists independently with rights and liability. This means that a company is treated as a separate person from its participants. It is owned by at least one shareholder and managed by at least one director. This separate legal personality has the consequence that a company has perpetual succession. The life of the company is not affected by the death, disability, insolvency or disagreement of a shareholder. Its existence is ended when it is wound up pursuant to the Companies Acts.The shareholders may come or go the life of the company like an artificial person is least affected by these changes. The liability of the shareholders is limited to the value of the shares held by them, it means if a company fails to pay its obligations, the personal properties of the shareholders cannot be sold for the settlement of business debts. 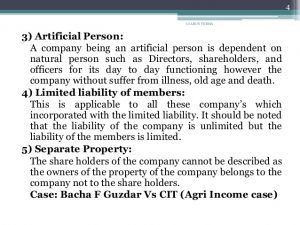 Most corporations that are used to carry on business in Australia are companies. This is because the company is an artificial person created by law which have many advantages compare with other business structure. Firstly, a limited company has a legal existence separate from management and its members. Secondly, the choice of company names is restricted and, providing a chosen name complies with the rules, no-one else can use it. The only protection for sole traders and partnerships is trademark legislation. As a result, it can commence or defend legal proceedings in its own name. Thirdly, the company has everlasting life. Directors, management and employees act as agent of the company. If they leave, retire, die – the company remains in existence. A company can only be terminated by winding up, liquidation or other order of the courts or Registrar of Companies. Last but not least, the current level of Corporation Tax is lower than income tax rate. Finally, the protection given by limited liability is perhaps the most important advantage of incorporation. The members’ only liability is for the amount unpaid on their shares. Since most private companies issue shares as “fully paid”, if things go wrong, a members’ only loss is the value of the shares and any loans made to the company. Personal assets are not put at risk. The separate legal personality has encouraged commercial activities. The separate legal personality makes companies become an attractive vehicle for commercial ventures, as the liability rests with the company, rather than the shareholders, directors, members or company officers. However, there are also many disadvantages for company structure.As a result, it is necessary to analyse the history of companies and the development of company law.

2.1 The emergence of the corporation aggregate and the concept of joint stock during the 15th to 19th centuries.

First, by the 17th and 18th century, there was already demand for pooled equity investment and share trading. As a result, Joint Stock Company develops in the 17th century. In more recent history, The East India Company was one of the most famous joint-stock companies. A joint stock company is in a position to raise capital. There is no restriction for the maximum number of owners in a joint stock company. Total capital of the company is divided into parts of small value called shares and this attracts the man who has limited resources to invest. In my opinion, joint-stock company is something similar to cross between modern publicly traded corporations and partnerships. The company is owned by shareholders, and the shares are freely traded on the open market, but the shareholders’ liability is not limited to the price they paid for the stock. However, it is difficult to form Joint Stock Company. The formation and registration of Joint Stock Company involves a long and complicated procedure. In general, incorporation was only possible by Royal charter or private act, and was limited owing to government’s jealous protection of the privileges and advantages thereby granted. As a result, the cost of formation of a joint stock company is very high. Many businesses came to be operated as unincorporated associations with a substantial amount of members during that time. For that reason, all litigation had to be carried out in the joint names of all the members.

2.2 The introduction of legislation to make incorporation available as a general right in 1844

2.3 the introduction of limited liability under statue in 1856

Limited liability was subsequently introduced by the limited liability act 1855. A limited liability corporation is a type of business entity in which the business itself is separate from its owners. “There can be an unlimited number of members in an LLC company. The company can be managed directly by its members or the members can designate a manager,” (Duermyer, 2008, p. 1) . The owner or owners of an LLC have limited liability for business debts. This allows each owner’s personal assets protection from lawsuits and judgments against the company. Shareholders’ liability is limited to the nominal value of the shares allotted to them. For example, bankruptcy will not affect the owner’s personal finances. The aim of the act was to encourage commercial enterprise, and to increase public confidence in the honesty of business. Limited liability makes companies an attractive vehicle for commercial ventures, as the liability rests with the company, rather than the shareholders, directors, members or company officers.

2.4 the recognition of the proprietary company as a distinct form of company in 1896

2.5 Confirmation that the privileges of incorporation extend to small, closely held companies, in SALOMON’S case in 1897

2.6 The statutory facilitation of true ‘one-person’ companies in 1998

In 1998, the Corporations law was amended to enable the use of companies for small, one-person businesses. Since 1 July 1998 it has been possible to form a company that has only one participant. The proposed introduction of one-person company into the legal system is a move that would encourage corporatization of business and entrepreneurship. In the UK, Australia, Singapore and Pakistan, a single person is capable of forming a private limited company which may be limited shares or guarantee. Such single-member companies need to have only one director, who may also be the company secretary.

There are many advantages for the law treats a company as being a separate person from its member and those who manage its operations. Firstly, a company’s obligations and liabilities are its own, and not those of its participants. Secondly, a company can sue and be sued in its own name. Finally, a company has perpetual succession a company’s property is not the property of its participants. Although the principles of separate legal personality and limited liability sometimes result in circumstances that may seem favorable to the Company’s shareholders and detrimental to its creditors, separate legal personality and limited liability is not the same thing. Limited liability is the logic consequence of the existence of a separate personality. The legal existence of a company means it can be responsible for its own debts. The shareholders will lose their initial investment in the company but they will not be responsible for the debts of the company. Just as human can have restriction imposed on their legal personality. A company may still be formed today without limited liability as a registered unlimited company.