How a Law can be Unconstitutional

A law becomes unconstitutional if it violates the rights and authority as provided by the constitution of the country. The constitution sets the limits on the actions the government may take in enforcing the law. The constitution clearly outlines the authority of the divisions of the government and spells the rights of the citizens which limits what they government may do to the people. But since the laws are only written, the government may sometimes bend or completely ignore them when taking some actions. For example, the Patriot Law is unconstitutional. Though this law was aimed at curbing terrorists and their activities, it has led to the violation of various civil rights of many Americans. In other words, it has made Americans less safe and free. The law infringes privacy rights since it allows surveillance of people gathered in group, allow unwarranted administrative search and seizure in private residences by the police as well as detaining of people until they are cleared using the hold and clear policy. 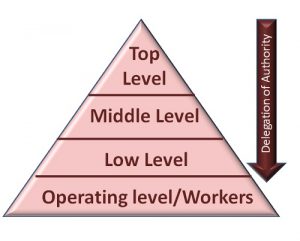 The law has led to violation of the freedom of information since the police are allowed to scrutinize the websites visited by individuals, books read in the library and any other source of information. One of the best examples to show how the enactment of the Patriot Act led to the violation of the civil rights is the case of Global Relief Foundation, global organization which deals with helping the unfortunate Muslims from all over the world. The police conducted a warrantless search on private residence of the director and the offices. Due to violation of the process to be followed, the organization felt that their privacy protection had been violated. These violations therefore illustrate how a law can be unconstitutional.

Delegation results from the congress giving some of its legislative and judicial authority to the administrative agencies. Consequently, the administrative agency receives quasi-legislative and quasi-judicial authority. Although the constitution allows the congress to have all the powers, in its various rulings, the US Supreme Court has allowed delegation of legislative and judicial authority in instances when doing so is in the best interest of the party (Congress) delegating the authority and the party (agencies) which the authority is being delegated to. This means the agencies may have the authority to make laws and hear disputes. According to Warren, the US Supreme Court allows U.S legislators to delegate and sub-delegate their powers to agency heads and their subordinates so as to enable them scrutinize administrative activities effectively. This was as a result of increased government activities and specialized tasks of the agency (46).

A delegation may be unconstitutional if it violates the authority as defined in the provisions of the constitution. Warren observes that only twice in the American history has the courts found delegation of powers to public offices invalid. The courts ruled that the powers were not delegated to performing agency. These cases are the Panama Refining Company vs. Ryan, 293 U.S. 388(1935) and the Schechter Poultry Corporation vs. United States, 295 U.S. 495 (1935) (49).Unconstitutional delegation can occur in three ways. Firstly, violation can occur as a result of the congress delegating to the administrative agencies, too much of its own authority. For example, in the Panama Refining case mentioned above, National Industrial Recovery Act which is responsible for revival of business and interstate commerce, allowed the president to prevent transportation of oil products in interstate commerce. The Supreme Court declared that this delegation was unconstitutional as too much power had been delegated to the president. Secondly, unconstitutional delegation may be as result of the congress delegating its own essential authority or those of the courts to the administrative agency. Some authority may not be delegated. For example in the Schechter poultry case above the court ruled that section three of the act which empowered the president to implement industrial codes in order to regulate the age, wages and employment hours of the employees for poultry industry was unconstitutional. It was unlawful and flawed procedurally.

Thirdly, delegation can be unconstitutional if it allows one branch to control another agency that is performing the functions of another branch. This is because the controlled agency may be wrongfully coerced into overusing its mandate of even in engaging in unlawful practices. This means the congress should will attempt to direct the decisions of the agency.

Congress Power of Creating and Organizing

The Congress exercise the oversight power given that it can dutifully create agencies as well as vet personnel holding senior positions in those agencies. For instance, it (Congress) exercises these powers to control the structure and the powers allocated to the board of education and department of education. Ultimately, this role can effectively allow the congress to limit the powers of the educational administrators and encourage responsible behavior in the execution of their duties (Warren 111).

They deal with legislative issues. Authorization committees can control the action of the education administrators through a set of five powers. According to Warren, these powers are: the power to authorize, reauthorize, amend and confirm appointments and conduct investigatory search (111). In the hypothetical case given, the authorization committees will exercise watch dog powers over the department and board of education and office of education so as to enhance accountability.

This will involve having laws capable of addressing issues of nonfeasance, malfeasance charges and misfeasance allegations. This will be applied when the administrator ignores the process of decision making, abuses power, acts unconstitutionally and acts beyond the allowed lawful authority.

Hatch act is the law that restrains government employees from engaging in active political activities. The original act prohibited. The original act prohibited almost all activities that are partisan. It banned the employees from holding leadership positions in partisan institutions, endorsing candidates running for political offices, engaging in political activities by organizing them, or distributing political materials. However these restrictions were relaxed in 1990s when President Bush vetoed changes in the act. In 1993 the changes became law. After the amendment some of the restrictions were relaxed. Civil servant today can contribute money and are involved in political groups. They also contribute to the campaigns of the political candidates by giving talks, distributing campaign materials. The remaining restrictions in the act are tailored towards the job of the employees. The civil servants are not allowed to use their job position to influence an election. The employees are not expected to engage in political activity while at work, in the office, driving in a public vehicle or in uniform.

According to the act various activities are now permitted in the current act. The civil servants may support candidates in an election by distributing campaign materials, making speeches, being a member of a political party and rallies. They may also participate in functions to raise money for political activities. The civil servants may vie for political offices, express their views on political issues and candidates. They are not restricted on how to vote or register in elections.

Social Media and the Hatch Law

The board of education employees can utilize a wide range of social networking sites to legally champion their cause. To this end, the most suitable social networking site they can utilize is facebook. The board can effectively use facebook to lobby against the disagreed legislation. Although the civil servants are prohibited from using their positions to influence or affect the outcome of an election, the employees can post their views regarding the election on their facebook walls and these would then be directed to all other employees’ “friends”. Ideally, this will be seen like the other employees saw the updates by chance. The act could only be interpreted as violating the Hatch Law if the employees will be intentionally directing the messages to other employees of the education board. To violate the Hatch Law using facebook will involve sending the employees messages, as this will be seen targeting other employees to influence the outcome of the disagreed legislation.