Before entering into a contract, the parties must be aware of the types of contract, which may be helpful in understanding their rights and duties. So, take a read of this article, in which we have provided the fundamental differences between void contract and voidable contract.

The contract becomes void due to the change in any law or any government policy for the time being in force in India. Along with that, the contracts which are opposed to public policy also ceases its enforceability. Contracts with incompetent persons are also declared void like minor, persons of unsound mind, alien enemy or convict, etc.

Voidable Contract is the contract which can be enforceable only at the option of one of the two parties to the contract. In this type of contract, one party is legally authorized to make a decision to perform or not to perform his part. The aggrieved party is independent to choose the action. The right may arise because the consent of the concerned party is influenced by coercion, undue influence, fraud or misrepresentation, etc. 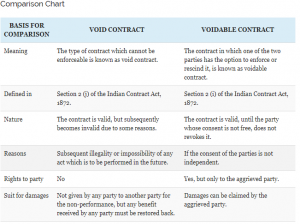 The major differences between void contract and voidable contract are as under:

There are many contracts which are valid, but sometimes due to certain circumstances, they cease to be enforceable which makes them a void contract because it is impossible that the contract is to be further executed. Similarly, many people unlawfully induce or persuade the will of another person to enter into a contract, which becomes voidable at the option of the party whose consent was so induced.