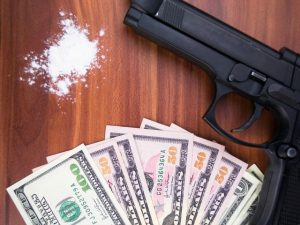 According to the United States Bureau of Justice, 2002 in the United States around one quarter of all convicted property and drug offenders in the local jails had committed their crimes in order to obtain money for additional illegal substances. Drug crimes include a large scope of felonies and misdemeanors depending on the substance and whether the crime committed was possession, sales or distribution, trafficking, manufacturing, or any combination thereof. While each of these crimes carries its own penalties, being convicted of any of these charges can be detrimental and life altering.

Drug possession is the crime of having illegal drugs or narcotics on one’s person, whether the purpose is for sales, distribution or personal use. Depending on what kind of drug is in possession, the penalty for conviction will vary. In the state of Illinois, if no more than 2.5 grams of marijuana are found in possession of a person, the charge may be a class C misdemeanor which is punishable by up to 30 days in jail, and/or fines up to $2,500. The sentences will generally increase greatly as the amount of marijuana found increases.

In the case of drug sales, as it includes possession, the penalty can be greater. Although the sentence will range depending on the circumstances, the penalties for these sales are pretty straight forward. In the case of heroin, cocaine and morphine, the penalty for less than 1 gram is a class 2 felony. If the sale involves 900 grams or more of heroin, cocaine or morphine, it is a class X felony, and the sentence can range from 15 years to 60 years in prison.

Every year there are literally millions of people who enter and exit the United States via sea vessel, aircraft and roadways. In addition to the human traffic, there are more than 9 million tons of cargo that come through the United States’ docks. Any number of these people or cargo containers can potentially contain illegal substances or narcotics, and all of these people and cargo containers are vehicles used by traffickers to bring these illegal substances into the United States, for the purpose of personal use, or selling and distributing. Drug trafficking can be a form of possession with intent to sell and distribute, the penalties for this are quite severe depending on the amount of substance found.

Drug related crimes can be very serious offenses if convicted. Depending on the amount discovered by law enforcement, any prior convictions of this kind and many other factors, the penalty can range from a misdemeanor to a serious felony. Because of the serious penalties for conviction, no one deserves to be wrongly convicted or even accused of a drug-related crime.