Hindu marriage joins two individuals for life, so that they can pursue dharma (duty), artha (possessions), and kama (physical desires). It is a union of two individuals as husband and wife, and is recognized by law. In Hinduism, marriage is followed by traditional rituals for consummation. 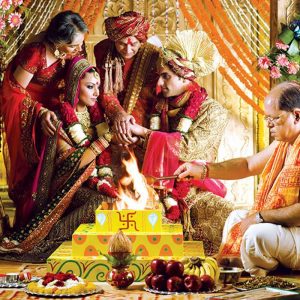 According to Hinduism there are eight different types of marriages. Not all have religious sanction.

The eight types are:

According to Hindu social customs, Hindu marriages are solemnised through religious rituals. In the Hindu religion, marriage is a religious duty, not a contract. In Bangladesh, Hindu marriage follows no legal proceedings rather social customs. Besides, Hindu marriage rituals or formalities vary from caste to caste. Family Court Ordinance, 1985 aims at resolving legal disputes related to dissolution of marriage, restitution of conjugal relation, dower, maintenance, and guardianship and custody of children. A Hindu woman can seek help from the ordinance only when the marriage is solemnised by Special Marriage Act 1872 and registered. It is amazing that there is no specific Hindu marriage law or no marriage registration system for Hindu people in Bangladesh. But, now days to legalize the marriage a Hindu couple can seek help from the court. The couple may notarise their marriage in front of two witnesses (one of the witnesses may be the priest who solemnised the marriage but it is not mandatory) like in Muslim marriage. After that the marriage will be registered. Problems arise when the parties from different religions would like to marry each other without changing their religion. Special Marriage Act 1872 is the preliminary solution of the problem but in case of determining inheritance of their successors it is really an impossible task as no domestic law can resolve the problem.

As per a 1946 law, Hindu women can file cases with courts to only regain the rights to conjugal life. Besides, the Hindu women can file cases under Family Court Ordinance 1985, Dowry Act 1980 and Women and Children Repression Act 2003. But these laws are too inadequate to protect the Hindu women’s rights. But the situation is very different in neighboring India. There are laws in that country to protect the rights of Hindu women such as Widow Marriage Act 1856, Racial Inability Remission Act 1850, Child Marriage Prevention Act 1929 (Amended 1938), Earned Property Affairs Act 1930, Inheritance Act 1925 and Hindu Women’s Rights to Lands Act 1937. Besides, new laws have been made in India after independence in 1947. These include Hindu Marriage Act 1955, Immature Children’s Property Act 1956, Hindu Adoption and Maintenance Act 1956, Hindu Inheritance Act 1956 and Special Marriage Act 1960.[5] It would be pertinent to mention the remarkable changes in ancient Hindu Law in India through the Hindu Marriage Act-1955:

1. Inter marriage between persons of different castes is not prohibited.
2. Monogamy which is essentially the voluntary union for life of one man with one woman to the exclusion of all others is now enforced by    legislation.
3.Bigamy has been made punishable as an offence.
4.The conditions and requirements of a valid marriage have been    considerably simplified.
5. Several matrimonial reliefs e.g., restitution of conjugal rights, judicial separation, nullity of marriage and divorce have been provided in this Act.

Hindu women in Bangladesh suffering for absence of marriage registration:

The harassment is too much for her to bear. Minati wants to terminate the marriage. She goes to court and finds to her surprise that the Hindu law does not help her much.

Consider the case of Kazali Rani Das, 23. She works as a day-labourer at her village. Her neighbour, Sanjoy Madhu, lured Kazali with a marriage proposal and convinced her. Then they got married and began their conjugal life at the house of Kazali’s parents. Before long, Kazali becomes pregnant and Sanjoy is asked to take Kazali to his own house.

Kazali’s trouble begins here. It does take long for Kazali to understand that she has fallen into a trap. Sanjoy delays to take Kazali to his house by making false excuses and later disclaims his marriage with her. Kazali is now too helpless to express her plight. Society does not want to believe what she says. She has no official document, as her marriage was not registered. This is no exception. It happens to thousands of Hindu women in Bangladesh.[6]

According to Hindu social customs, Hindu marriages are solemnized merely through some religious rituals. There is no marriage registration system for Hindu people in Bangladesh. It is surprising that there is also no Hindu marriage law or Hindu marriage register in the country. So, if any Hindu woman suffers in the hands of her in-laws, she does not get legal help.

A total of 926 marriage cases were received by Ain O Shalish Kendra during July 2003 to February 2004 period. Of them, only 17 cases were related to Hindu women. Says lawyer Nina Goswami, “Hindu women do not complain much fearing the marriage will break. That fear grips them because divorced Hindu women find it hard to get new husbands. There is no law allowing Hindu widows to remarry.”

But the situation is very different in neighboring India. There are laws in that country to protect the rights of Hindu women such as Widow Marriage Act 1856, Racial Inability Remission Act 1850, Child Marriage Prevention Act 1929 (Amendment 1938), Earned Property Affairs Act 1930, Inheritance Act 1925 and Hindu Women’s Rights to Lands Act 1937.

Efforts to enact laws to protect Hindu women’s rights in Bangladesh are thwarted by conservatives. There are Hindu men who leave their first wives and take second ones, but the same people resist changes for the better.[8]

Although the clauses No 19 (1) and 19 (2) of the constitution carry clear provisions that the state will ensure equal rights to all citizens and remove social and economic disparities, no government came up with steps to reform Hindu laws for protecting Hindu women’s rights.

Awami League presidium member Surajit Sen Gupta says, “Hindu laws need to be reformed in our country. But the free democratic environment that is needed for the reforms has not properly developed yet.”

Hindu religionist and Professor of Culture and Pali Department of Dhaka University Dr Niranjan Odhikari says, “Marriage registration is as necessary as the babies’ birth registration. It will be helpful if Parliament makes laws in this regard.”

President of Metropolitan City Universal Puja Committee Swapan Shaha says: “There should be laws to guide Hindu marriage, including rights to divorce because Hindu women are sometimes forced to leave their husbands’ houses. In such a case, a woman should be able to obtain legal divorce and take another husband.”

A Hindu woman social worker, preferring anonymity, regrets, “People in our country only think of the society. They forget that marriage registration is a right of women”. Advocate Nina Goswami also says, “In fact, the Hindu women have no right in our country. But we have nothing to do.”

The government can proclaim an ordinance regarding the registration of the existing Hindu marriages with the support of the local government like birth registration side by side sophisticate the Muslim Family Law Ordinance to be supportive to the other religious community. It will be a remarkable act and will put an end to the applications of religious personal laws. I think it is high time to withdraw the reservation for the full implementation of the international instrument and it is also necessary to change the domestic laws as a complement. A unitary personal law codification is very much necessary.