The United Nations Declaration on the Rights of Indigenous Peoples. delineates and defines the individual and collective rights of Indigenous peoples, including their ownership rights to cultural and ceremonial expression, identity, language, employment, health, education and other issues.

Indigenous peoples are inheritors and practitioners of unique cultures and ways of relating to people and the environment. They have retained social, cultural, economic and political characteristics that are distinct from those of the dominant societies in which they live. Despite their cultural differences, indigenous peoples from around the world share common problems related to the protection of their rights as distinct peoples.

Indigenous peoples  have sought recognition of their identities, way of life and their right to traditional lands, territories and natural resources for years, yet throughout history, their rights have always been violated. Indigenous peoples today, are arguably among the most disadvantaged and vulnerable groups of people in the world. The international community now recognizes that special measures are required to protect their rights and maintain their distinct cultures and way of life. Find below a short history of the indigenous struggle in the international stage. 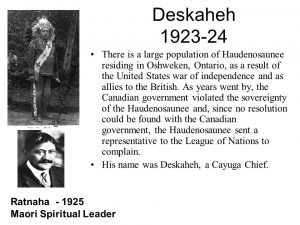 In 1923, Haudenosaunee Chief Deskaheh travelled to Geneva to speak to the League of Nations and defend the right of his people to live under their own laws, on their own land and under their own faith. Even though he was not allowed to speak and returned home in 1925, his vision nourished the generations that followed.

A similar journey was made by Maori religious leader T.W. Ratana. To protest the breaking of the Treaty of Waitangi concluded with the Maori in New Zealand in 1840 that gave Maori ownership of their lands, Ratana first traveled to London with a large delegation first to petition King George, but he was denied access. He then sent part of his delegation to Geneva to the League of Nations and arrived there later himself, in 1925, but was also denied access.

In the history of indigenous issues at the United Nations, there is considerable thinking and debate on the definition of “indigenous peoples”, but no such definition has ever been adopted by any UN-system body. One of the most cited descriptions of the concept of the indigenous peoples was given by Jose R. Martinez Cobo, the Special Rapporteur of the Sub-Commission on Prevention of Discrimination and Protection of Minorities, in his famous Study on the Problem of Discrimination against Indigenous Populations.

The study offered a working definition of “indigenous communities, peoples and nations”. In doing so he expressed a number of basic ideas to provide the intellectual framework for this effort, which included the right of indigenous peoples themselves to define what and who is indigenous. The working definition reads as follows:

“Indigenous communities, peoples and nations are those which, having a historical continuity with pre-invasion and pre-colonial societies that developed on their territories, consider themselves distinct from other sectors of the societies now prevailing on those territories, or parts of them. They form at present non-dominant sectors of society and are determined to preserve, develop and transmit to future generations their ancestral territories, and their ethnic identity, as the basis of their continued existence as peoples, in accordance with their own cultural patterns, social institutions and legal system.

This historical continuity may consist of the continuation, for an extended period reaching into the present of one or more of the following factors:

In 1982 the Working Group on Indigenous Populations (WGIP) was established as a subsidiary organ to the Sub-Commission on the Promotion and Protection of Human Rights. The Working Group provided an opportunity for indigenous peoples to share their experiences and raise their concerns at the UN.

As a subsidiary organ of the Sub-Commission, the Working Group was located at the lowest level of the hierarchy of UN human rights bodies. Its recommendations had to be considered and accepted first by its superior body, the Sub-Commission, then by the Commission on Human Rights and the Economic and Social Council (ECOSOC) before reaching the General Assembly.

As a result, the Working Group on Indigenous Populations met for the last time in July 2007.