There are two types of constructive trust: institutional and remedial. 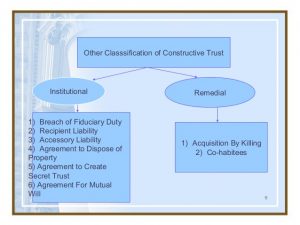 An institutional constructive trust is one that arises by operation of the principles of equity and whose existence the Court simply recognises in a declaratory way. An institutional constructive trust arises upon the happening of the events which bring it into being. Its existence is not dependent on any order of the Court. Such order simply recognises that it came into being at the earlier time and provides for its implementation in whatever way is appropriate.

An institutional constructive trust (which may be protected by caveat) can arise when the proceeds of a fraud are used to acquire a registerable interest in land: Attorney-General for Hong Kong v Reid; Trustees Executors Ltd v Eden Holdings 2010 Ltd.

For these reasons constructive trusts, unlike say express trusts, do not depend on the intention of the parties.

Constructive trusts are a means to enforce accountability and to avoid money or other property being retaned by the “wrong” party.

“The remedial constructive trust has taken root in the United States and Canada: it is unlikely to do so in England”

The constructive trust is an important tool in equity to deal with the deficiencies of the common law and statutory systems. It is a residual category where the courts have found it necessary to impose an individual to hold a trust in benefit for another in the interests of justice and good conscience. Under English law there is a limited amount of circumstances that the court will do this and they are known as Institutional Constructive Trusts. The Institutional Constructive Trust is a trust set on fulfilling a specific set of circumstances, which include fraudulent conduct, fiduciary duty, disposition of trust property in breach of trust instrument and the matrimonial home trust. The Remedial Constructive Trust is a variation that is in operation in the USA and Canada and used as a remedy to injustices, it is a much more flexible approach and designed to ensure that the lack in the common and statutory legal structures do not result with injustice, i.e. providing a remedy that is the most just given the facts of the case.

Here the trust is regarded simply as a potential remedy (one among others) available to a plaintiff to secure compensation in an action for unjust enrichment. A trust might be imposed by the court on the defendant’s property when a proprietary remedy (in this case the conferring of a beneficial interest under a trust) is more suitable than, say, an award of damages. The plaintiff’s interest under the trust does not necessarily pre-date the order of the court.

The remedial constructive trust in Canada used the Lord Denning’s definition of a remedial nature of a trust imposed by the court, as per Hussey v Palmer. From this case Canada has created a body of case law approving the trust, even though the House of Lords rejected this approach. It has been developed to include cases where there has been no benefit or loss but because of the lack of good conscience the remedial nature of equity and justice demands the imposition of a trust. As defined in the Supreme Court of Canada’s decision in Soulos v Korkontzilas:

English law has steered away from this approach, by rejecting the approach of Lord Denning, because in many instances the general consensus is that the rule of precedent is unsettled by such an approach and equity is an excuse for judges to become law makers rather than the interpreters of law. This was the approach taken by the House of Lords when Lord Denning in the 1970s tried to institute remedial trusts in respect to the matrimonial home. Court of Appeal Judges, headed by Lord Denning, in the late 60s and 70s recognized that there was problem in respect to the changing face of the family home, i.e. women were working and no longer the traditional house wife; as well as the growing number of co-habiting couples and had not entered into the institution of marriage and aimed to protect the rights of women, which the common law was neglecting when families split up because these women did not hold property rights. Lord Denning developed a new form of constructive trust to ensure that non-financial contributions to the home were recognized and the matrimonial constructive trust was created, i.e. a remedial constructive trust. However the House of Lords rejected this approach as encroaching on property rights, but did allow for a trust to be created if substantial contributions were submitted to the matrimonial home, e.g. mortgage payments and home improvements. There are still problems today that equity is still trying to deal with, such as unmarried couples and same-sex couples and as Sir Scott Medforth states:

‘I do not, for my part, think it matters one jot whether the duty is expressed as a common law duty or as a duty in equity. The result is the same.’

Therefore there seems to be quarters of the English judiciary that are calling for the remedial constructive trust but the conservative establishment is not allowing for the change, because of the fears that judges will play the role of parliament and become law makers.

Legislation involves an inescapable measure of uncertainty for two reasons. Firstly, the individual’s that draft and pass the statute are only human, influenced by politics and economics, creating a situation of bias and mistakes; secondly, the creators of statute cannot create a statute that deals with every circumstance that may be created by interactions between individuals. The courts must interpret and apply the words of the statute in question to the particular circumstance in hand, sometimes this circumstance may be have been dealt with already and precedent rules are applied; however if there is no existing precedent then this creates an uncertain circumstance and judicial interpretation is required. How to ascertain what Parliament meant to achieve in a statute? The starting point is the English words used, i.e. the literal rule. If the literal rule does not suffice then the mischief rule should be applied. This has become easier since Pepper v Hart where the courts can refer to the Hansard reports of Parliamentary debates in order to clear up ambiguities and obscurities in statutory wording, which also includes the reports of the Law Reform Commission. The main gist that is revealed is that the courts are not law makers, which the remedial constructive trust would integrate into the legal system. Therefore the flexibility that this new model of constructive trust would bring is denied. This can be illustrated by the flexible approach of the USA to Constructive Fraud being denied under English law in reference to the autonomy of letters of credit and the fraud exception rule, i.e. certainty of contracts v equitable justice.

The Sztejn Case as in the UK is the key case dealing with fraud exception; however it is not limited by a high burden of proof. It also is not limited to intentional and unequivocal fraud, i.e. it includes constructive fraud and egregarious fraud, but most interestingly the USA approach has a flexible standard that is indicative of the USA’s adherence to justice in contracts whether on party is a company or not. This flexible standard is confirmed in the case of United Bank Ltd v Cambridge Sporting Goods Corp :

It should be noted that the drafters of section 5-114, in their attempt to codify the Sztejn case and in utilizing the term “fraud in the transaction”, have eschewed a dogmatic approach and adopted a flexible standard to be applied as the circumstances of a particular situation mandate. It can be difficult to draw a precise line between cases involving breach of warranty (or a difference of opinion as to the quality of goods) and outright fraudulent practice on the part of the seller.

Therefore this leads on to the conclusion that the approach of the UK is too entrenched in the belief that certainty in commercial contracts outweighs justice, which has created a lopsided and unfair system concerning letters of credit. This is especially so when the fraud exception is based upon principles that promote justice as in the USA, i.e. the flexibility in the USA allows for equitable interpretation by judges whereas the UK upholds the certainty of contracts. This would lead on to conclude that the English legal system would not allow their judges to introduce a remedial constructive trust because of its ability to bring uncertainty to the justice system, as well as threatening the rule of law as set up by parliament.

This conclusion is supported by the House of Lords rejection of Lord Denning’s new constructive trust. As Martin purports that the new model constructive trust has provided a further testament to the flexibility of equity in property law, which would have resulted with injustice if equity was afraid to step into the bounds of property law because of the possible erosion of the distinction between the role of equity and the role of common and statutory law. The flexibility of equity is illustrated in the case of Eves v Eves where Lord Denning stated:

‘Equity is not past the age of childbearing. One of her latest progeny is a constructive trust of a new model. Lord Diplock brought it into the world and we have nourished it.’’

However Denning view of evolving equity was rejected by a conservative House of Lords, which is indicative of the English Legal System refusal for a flexible role its judges.