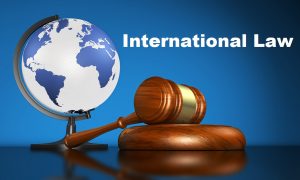 International law systems, justice, human rights and global business education concept with world map on a school globe and a gavel on a desk on blue background.

International Trade Law includes the appropriate rules and customs for handling trade between countries. However, it is also used in legal writings as trade between private sectors, which is not right. This branch of law is now an independent field of study as most governments has become part of the world trade, as members of the World Trade Organization (WTO). Since the transaction between private sectors of different countries is an important part of the WTO activities, this latter branch of law is now a very important part of the academic works and is under study in many universities across the world.

The body of rules for transnational trade in the 21st century derives from medieval commercial laws called the lex mercatoria and lex maritima — respectively, “the law for merchants on land” and “the law for merchants on sea.” Modern trade law (extending beyond bilateral treaties) began shortly after the Second World War, with the negotiation of a multilateral treaty to deal with trade in goods: the General Agreement on Tariffs and Trade (GATT).

International trade law is based on theories of economic liberalism developed in Europe and later the United States from the 18th century onwards.

The General Agreement on Tariffs and Trade

The earliest major international trade agreement involving a significant number of countries is the 1948 General Agreement on Tariffs and Trade (GATT). The Agreement prohibits economic activity that member nations see as unfair. One of the prohibited practices is dumping or lowering prices in one geographic area in order to push out a competitor. Another prohibited practice is offering subsidies in order to disproportionately aid a certain economic sector. The establishment of the World Trade Organization in 1994 supersedes GATT.

There are five guiding principles in the World Trade Organization:

1. Non-discrimination – All member countries must grant the same, favorable conditions for trade to other member countries. They must apply uniform rules to every country in the organization. Once a product is in the country, the standards must be the same as they are for domestic products with regards to technology specifications and other requirements.

2. Reciprocity – Member states should work towards lowering barriers for trade in exchange for the same concessions from other countries.

3. Agreements are enforceable – Member countries may raise disputes and have those disputes heard exclusively in the jurisdiction of the World Trade Organization.

4. Transparency – Countries must publish their trade regulations and make them accessible. They must also respond to direct requests for information.

When disputes arise regarding international trade law, the World Trade Organization has a system for mediation. As many as 25 percent of disputes resolve through the mediation process. For cases that don’t resolve through mediation, the disputing parties can resolve their case through a formal tribunal.

In 1995, the World Trade Organization, a formal international organization to regulate trade, was established. It is the most important development in the history of international trade law.

The purposes and structure of the organization is governed by the Agreement Establishing The World Trade Organization, also known as the “Marrakesh Agreement”. It does not specify the actual rules that govern international trade in specific areas. These are found in separate treaties, annexed to the Marrakesh Agreement.

Principles of the WTO:

The General Agreement on Tariffs and Trade(GATT) has been the backbone of international trade law since 1948 after the charter for international trade had been agreed upon in Havana. It contains rules relating to “unfair” trading practices — dumping and subsidies. Many things impacted GATT like the Uruguay Round and the North American Free Trade Agreement.

In 1994 the World Trade Organization (WTO) was established to take the place of the GATT. This is because the GATT was meant to be a temporary fix to trade issues, and the founders hoped for something more concrete. It took many years for this to come about however, because of the lack of money. The British Economy was in crisis and there wasn’t much backing from congress to pass the new agreement.

The idea of these agreements ( WTO and GATT was to create an equal field for all countries in trade. This way all countries got something of equal value out of the trade. This was a difficult thing to do since every country has a different economy size. This lead to the Trade Expansion act of 1962.

Cross-border operations are subject to taxation by more than one country. Commercial activity that occurs among several jurisdictions or countries is called a cross-border transaction. Those involved in any international business development or international trade should be knowledgeable in tax law, as every country enforces different laws on foreign businesses. International tax planning ensures that cross-border businesses stay tax compliant and avoid or lessen double taxation.

The World Trade Organization is the ‘only global international organization dealing with the rules of trade between nations’. It is a ‘rules-based, member-driven’ multilateral organization, founded in 1994 . The objectives of the WTO recognise that its Member States’ ‘relations in the field of trade and economic endeavour should be conducted with a view to raising standards of living, ensuring full employment and a large and steadily growing volume of real income and effective demand, and expanding the production of and trade in goods and services, while allowing for the optimal use of the world’s resources in accordance with the objective of sustainable development, seeking both to protect and preserve the environment and to enhance the means for doing so in a manner consistent with their respective needs and concerns at different levels of economic development’. [*]

Joining the WTO involves making a ‘single undertaking’ to accede to all of the WTO agreements as a ‘whole and indivisible package’. In making the single undertaking, WTO Members accede to the Marrakesh Agreement Establishing the World Trade Organization, as well as more than two dozen ‘covered agreements’ regulating different aspects of trade between members. Under these agreements, Members commit to restrictions on their imposition of tariff barriers (such as import taxes or customs duties) and non-tariff barriers to trade (such as regulatory measures, quantitative restrictions, and internal tax laws that apply to both domestic and imported products). WTO Members also make commitments in other areas related to trade, such as protection of intellectual property rights, food safety, agriculture, customs valuation, and subsidies.

International trade lawyers may advise both U.S. companies doing business abroad and foreign businesses operating in the U.S. Companies hire international trade attorneys to counsel them on the relevant international trade rules, advise them on compliance with such rules, as well as to conduct internal investigations, prepare voluntary disclosures, and/or represent them in enforcement actions related to the violation of such rules.

On the domestic side, international trade attorneys may represent their clients before the ITC or the Department of Commerce (“DOC”) regarding disputes related to import laws and remedies (e.g., antidumping actions). If the ITC, DOC, or U.S. Customs and Border Protection make a determination that a client disagrees with, the attorney may represent the client in a protest at the Court of International Trade. Lawyers will also assist clients with customs classification, valuation, and rules of origin matters. International trade attorneys will also help their clients secure the proper license from the DOC or Department of State to export goods. The lawyers may assist companies looking to acquire a U.S. target that is under review by the Committee on Foreign Investment in the United States (“CFIUS”), a committee that reviews the national security implications of investment in U.S. assets.

Trade lawyers on the international side handle a lot of disputes, for which the WTO is the primary arbitrator. Only sovereign states can bring disputes to the WTO, and the United States does not hire outside counsel to represent them in these matters, so international trade attorneys often represent other countries. Attorneys may also become involved in lobbying efforts on behalf of their clients to influence international rules.