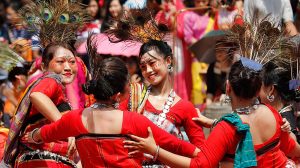 Indigenous peoples, also known as First peoples, Aboriginal peoples or Native peoples, are ethnic groups who are the original settlers of a given region, in contrast to groups that have settled, occupied or colonized the area more recently. Groups are usually described as indigenous when they maintain traditions or other aspects of an early culture that is associated with a given region. Not all indigenous peoples share this characteristic, as many have adopted substantial elements of a colonizing culture, such as dress, religion or language. Indigenous peoples may be settled in a given region (sedentary) or exhibit a nomadic lifestyle across a large territory, but they are generally historically associated with a specific territory on which they depend. Indigenous societies are found in every inhabited climate zone and continent of the world.

Since indigenous peoples are often faced with threats to their sovereignty, economic well-being and their access to the resources on which their cultures depend, political rights have been set forth in international law by international organizations such as the United Nations, the International Labour Organization and the World Bank. The United Nations has issued a Declaration on the Rights of Indigenous Peoples (UNDRIP) to guide member-state national policies to the collective rights of indigenous peoples, such as culture, identity, language and access to employment, health, education and natural resources. Estimates put the total population of indigenous peoples from 220 million to 350 million.

International Day of the World’s Indigenous Peoples is celebrated on 9 August each year.

Indigenous peoples often face difficulties in accessing social protection benefits, usually as a result of discrimination, economic and social disadvantages;  often as an aftereffect to historic injustices (such as colonization and dispossession of their lands, territories and resources). In many cases, there is also a causal link between exclusion from social protection and inequities between urban and rural areas (due to geographical inaccessibility), language (information may not be available in all languages) and culture (benefits and services may not be adapted to cultural sensitivities).

Bangladeshi authorities did little to prevent intensifying violence and discrimination against indigenous groups residing in the Chittagong Hill Tracts. There were repeated clashes between ethnic and religious minority groups and “settlers” who belong to the majority Bengali community. These clashes were in part a result of government failure to implement its agreement with the indigenous communities to protect their rights.

The UN Declaration on the Rights of Indigenous Peoples, adopted by the General Assembly in 2007, states that indigenous peoples have the right, without discrimination, to the improvement of their economic and social conditions. These include, for instance, access to education, employment, vocational training and retraining, housing, sanitation, health and social security. States shall take effective measures and, where appropriate, special measures to ensure continuing improvement of their economic and social conditions. Particular attention shall be paid to the rights and special needs of indigenous older persons, women, youth, children and persons with disabilities (Article 21).
The ILO Indigenous and Tribal Peoples Convention, 1989 (No. 169) contains specific provisions on social protection:

“Governments shall do everything possible to prevent any discrimination between workers belonging to the peoples concerned and other workers, in particular as regards: … (c) medical and social assistance, occupational safety and health, all social security benefits and any other occupationally related benefits, and housing” (Article 2).

In addition, the Convention specifies that
“social security schemes shall be extended progressively to cover the peoples concerned, and applied without discrimination against them” (Article 24).
The Convention also calls on governments to consult with the peoples concerned with regard to legislative or administrative measures that may directly affect them, and establishes the right of these peoples to participate in decision-making processes regarding policies and programmes that concern them.

Those in the Bangladesh Rifles (since renamed Bangladesh Border Guards) responsible for the killings, violence and other crimes that took place on February 25 and 26, 2009 should obviously be held accountable; however, the process of accountability in a civilized country like Bangladesh should not include custodial killings, torture and unfair criminal trials.

One would like to believe that the government has a credible response to these questions but experience suggests that this is unlikely to be provided.

But perhaps the cruelest thing of all for those of us living in Bangladesh is that unless the government starts to acknowledge its responsibility for the human rights violations by its law enforcement agencies, nothing at all will change for the better.