Trespass to goods, trespass de bonis asportatis, affords a remedy where there has been a direct interference with goods in the claimant’s possession at the time of the trespass, whether that be by taking the goods from him or damaging the goods without removing them.Trespass and conversion deal with intentional interference with goods. Where goods are lost or damaged as a result of the defendant’s breach of a duty of care, an action may lie in negligence.

Trespass to goods is an infringement of the right of possession not of ownership. There are three types of torts relating to goods 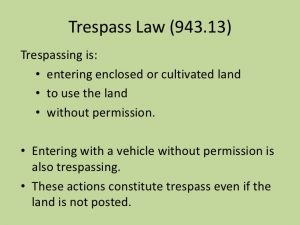 Prof. Salmond: “Trespass to goods consists in committing without lawful justification any act of direct physical interference with a chattel in the possession of another person.”

Pollock: “Trespass to goods may be committed by taking possession of them or by any other act in itself immediately injurious to the goods in respect of the possessor’s interest as by killing, beating or chasing animals, or defacing a work of art.”

Two forms – it may assume:

a. Taking the thing away from the plaintiffs possession, when it is termed aspiration (removal, seizure etc.)

i. this would amount a crime of theft

ii. To robbery if it was also forcible.

b. Different application of force- damage

i. killing or injuring of an animal

ii. Defacing a work of art.

Damage is not always essential. Even the slightest application of force like touching is wrongful.

Essentials of trespass to goods:

2.  A person in possession, though not the owner can sue.

Conversion is the tort committed by a person who deals with chattels not belonging to him in a manner which is inconsistent with the rights of the lawful owner, by which the latter is deprived of the use and possession of the chattel.

It is the wrong done by an unauthorized act which deprives another of his property permanently or for an indefinite time.

A person, who treats goods as if they were his when they are not, is liable to be sued in conversion.

1. When the property is wrongfully taken: Conversion may be committed by wrongfully a chattel out of the possession of another.

Where a person lopped the branches of fruit trees over hanging his land and appropriated the fruit it was held that, as the right to pick and appropriate the fruit, he was guilty of conversion and liable to the owner for its value.

2. Conversion by parting with goods: If a man, who entrusted with the goods of another, put them into the hands of a third person contrary to orders, it is a conversion.

E.g. you took a book from me, but you gave it to another without returning the book.

“The hirer of a piano, who sends it to an auctioneer to be sold, is guilty of conversion, and so is the auctioneer who refuses to deliver it up unless the expenses incurred be first paid.”

3. Conversion by sell: Wrongfully sale of goods is conversion. Any person who however so innocently obtains possession of the goods of a person who has been fraudulently deprived of them and disposes of them whether for his own benefit or that of any other person is guilty of conversion.

4. Conversion by keeping: Where a man has possession of another’s chattel and refuses to deliver it. This is an assertion of a right inconsistent with his general dominion over it. It amounts to an act of conversion.

5. Conversion by destruction: An unauthorized destruction of the plaintiff’s goods constitutes conversion. It amounts to an adverse exercise of dominion.

Taking wine from a cask and filling it with water is a conversion of the whole liquor.

6. Conversion by denial of rights

7. Conversion by delivery:  If the defendant delivery the goods of the plaintiff to a third person without the plaintiffs authority, he is guilty of conversion.

8. Conversion by detention: If the detention is adverse to the right of the person entitled to possession.

E.g.  Where bailee refuses to return the chattel to his bail or on demand.

Differences between Conversion and trespass:

Differences between Conversion and trespass: