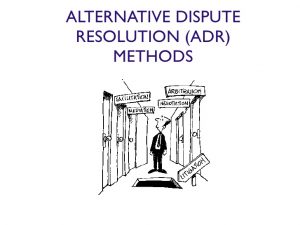 Any method of resolving disputes without litigation.  Abbreviated as ADR.  Public courts may be asked to review the validity of ADR methods, but they will rarely overturn ADR decisions and awards if the disputing parties formed a valid contract to abide by them.  Arbitration and mediation are the two major forms of ADR. 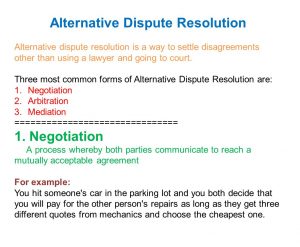 Alternative dispute resolution is a way to settle disagreements other than using a lawyer and going to court. Three most common forms of Alternative Dispute Resolution are: Negotiation. Arbitration. Mediation. =============================== 1. Negotiation. A process whereby both parties communicate to reach a mutually acceptable agreement. For example: You hit someone s car in the parking lot and you both decide that you will pay for the other person s repairs as long as they get three different quotes from mechanics and choose the cheapest one.

Alternative Dispute Resolution (“ADR”) refers to any means of settling disputes outside of the courtroom. ADR typically includes early neutral evaluation, negotiation, conciliation, mediation, and arbitration. As burgeoning court queues, rising costs of litigation, and time delays continue to plague litigants, more states have begun experimenting with ADR programs. Some of these programs are voluntary; others are mandatory.

While the two most common forms of ADR are arbitration and mediation, negotiation is almost always attempted first to resolve a dispute. It is the preeminent mode of dispute resolution. Negotiation allows the parties to meet in order to settle a dispute. The main advantage of this form of dispute settlement is that it allows the parties themselves to control the process and the solution. 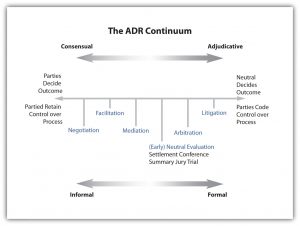 Mediation is also an informal alternative to litigation. Mediators are individuals trained in negotiations, who bring opposing parties together and attempt to work out a settlement or agreement that both parties accept or reject. Mediation is used for a wide gamut of case-types ranging from juvenile felonies to federal government negotiations with Native American Indian tribes. Mediation has also become a significant method for resolving disputes between investors and their stock brokers. See Securities Dispute Resolution. 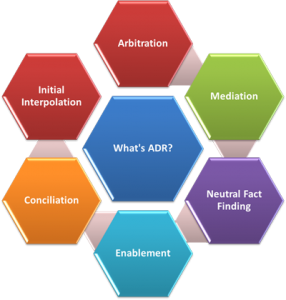 Arbitration is a simplified version of a trial involving limited discovery and simplified rules of evidence. The arbitration is headed and decided by an arbitral panel. To comprise a panel, either both sides agree on one arbitrator, or each side selects one arbitrator and the two arbitrators elect the third. Arbitration hearings usually last between a few days to a week, and the panel only meets for a few hours per day. The panel then deliberates and issues a written decision, or arbitral award. Opinions are not public record. Arbitration has long been used in labor, construction, and securities regulation, but is now gaining popularity in other business disputes. Title 9 of the U.S. Code establishes federal law supporting arbitration. It is based on Congress’s plenary power over interstate commerce. Where Title 9 applies, its terms prevail over state law. There are, however, numerous state laws on ADR. Forty-nine states have adopted the 1956 version of the Uniform Arbitration Act as state law. The act was revised in 2000 and subsequently adopted by twelve states. The arbitration agreement and award is now enforceable under both state and federal law.

In 1958, the Convention on the Recognition and Enforcement of Foreign Arbitral Awards, or the “New York Convention”, was drafted to aid in the enforcement in domestic courts of awards granted in foreign countries. In 1970, the United States joined and, as of June 2017, there are 157 countries participating in the convention.

Last Updated in June of 2017 by Tala Esmaili