‘Economics’ is defined as the study of how the humans work together to convert limited resources into goods and services to satisfy their wants (unlimited) and how they distribute the same among themselves. Economics has been divided into two broad parts i.e. Micro Economics and Macro Economics. Here, in the given article we’ve broken down the concept and all the important differences between micro economics and macro economics, in tabular form, have a look.

Microeconomics is the branch of economics that concentrates on the behaviour and performance of the individual units, i.e. consumers, family, industry, firms. Here, the demand plays a key role in determining the quantity and the price of a product along with the price and quantity of related goods (complementary goods) and substitute products, so as to make a judicious decision regarding the allocation of scarce resources, concerning their alternative uses.

Macroeconomics is the branch of economics that concentrates on the behaviour and performance of aggregate variables and those issues which affect the whole economy. It includes regional, national and international economies and covers the major areas of the economy like unemployment, poverty, general price level, GDP (Gross Domestic Product), imports and exports, economic growth, globalisation, monetary/ fiscal policy, etc. It helps in resolving the various problems of the economy, thereby enabling it to function efficiently. 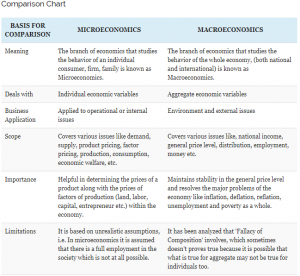 The points given below explains the difference between micro and macro economics in detail:

Micro and Macro Economics are not contradictory in nature, in fact, they are complementary. As every coin has two aspects- micro and macroeconomics are also the two aspects of the same coin, where one’s demerit is others merit and in this way they cover the whole economy. The only important thing which makes them different is the area of application.