Monopolies and Restrictive Trade Practices (MRTP) Act, 1969 was revoked and replaced byCompetition Act, 2002. MRTP Act was enacted to deal with monopolistic, restrictive and unfair trade practices, but due to certain limitations, Competition Act was introduced, which changed the focus from curbing monopolies to promoting competition.

Both the acts apply to whole India, except the state of Jammu and Kashmir. While the old act belongs to pre-liberalisation period, the new Act, came into force after liberalization. The arrangement and language of the new act are much simpler than the old one.

In other words, Competition Act is an improvement over the MRTP Act. So, there are vast differences between the two regarding scope, focus, purpose, etc.

MRTP Act or otherwise known as Monopolistic and Restrictive Trade Practices Act, was the first-time ever, competition law in India, that came into force in the year 1970. However, it underwent amendment in different years. It aimed at:

Competition Act, 2002 is meant to create a Commission that prevents activities which adversely affect competition and initiate and sustain competition in the industry. Further, it aims at protecting consumer interest and corroborating freedom of trade. The commission is empowered to:

The act applies to whole India, except in Jammu & Kashmir. It was enacted to enforce competition policy in the country and also to stop and penalize anti-competitive trade activities of the undertaking and undue intervention of the government in the market. 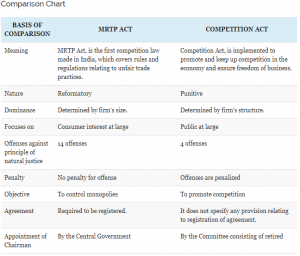 The fundamental points of difference between MRTP Act and Competition Act are given as follows:

In short, the two acts are different in a number of contexts. MRTP Act has a number of loopholes and the Competition Act, covers all the areas which the MRTP Act lags. The MRTP Commission plays only advisory role. On the other side, Commission has a number of powers which promotes suo moto and levies punishment to those firms which affects the market in a negative way.