Islam’s contributions to this subject are a living tribute to the strength of the Faith to protect and enhance the status of the Family as the crucial nucleus of our civilization’s civic life. The Quran contains many direct commands for the purpose of keeping the Family in tact. Such mandates apply regardless of geography or ethnic specificity as such instructions are binding on everyone.This research is to produce a concise, brief document that indicates best practices and reforms in the application and implementation of family law in Muslim countries. Thereby, the positive developments that are occurring in the Muslim world’s legislative and judicial practice better known and available to other states and practitioners that are grappling with the same issues. This document is not meant to be either prescriptive or an exhaustive record of all family law in all Muslim countries.

The literature reviewed the laws and family codes of Algeria, Egypt, Indonesia, Iran, Jordan, Lebanon, Malaysia, Morocco, Syria, Tunisia, and Turkey. Referenced statistics and comparable data often extend beyond these countries; we have indicated the scope of those statistics when used, indicating whether comparisons are with the entire Middle East and North Africa (MENA) region, the Arab World, or countries with Muslim majority populations more broadly.

The RAND Corporation and the Woodrow Wilson International Center for Scholars began collaboration on this project in March 2005 under the joint leadership of Haleh Esfandiari, Director of the Middle East Program at the Wilson Center, and Cheryl Benard, Senior Political Analyst and Director of the Initiative for Middle Eastern Youth at the RAND Corporation. A team of researchers compared the constitutions and family law codes of the 12 Muslim countries listed above on topics ranging from issues of marriage and divorce to legal rights and violence against women. Research included a review not only of written laws but also of their application, with reference to secondary literature on the topic.

A leading author, sums up such totality of obligations qua the family by saying:  “The family bond entails mutual expectations of rights and obligations that are prescribed by religion, enforced by law and observed by group members. These pertain to identity and provision, inheritance and counsel; affection for the young

For Muslims, the institution of marriage is regarded as extremely important. Muslims marriages are contracts of a relatively simple nature which only requires offer and acceptance in front of two witnesses. Apart from socio cultural practices. Muslim marriages require little ceremony or ritual to give the marriage legality. In effect it is a civil contract with religious overtones.

The Holy Prophet said: “Men marry for their property, status or their beauty: but you should marry for their piety (Ibadat). Thus, marriage partakes the nature of Ibadat (worship) and muamalat (worldly affairs).

In substance a Muslim marriage is a contract but a sanctified religious contract. Hence Muslim jurists regard Nikah to be both temporal and religious at the same time. It is not purely a civil contract or a sacrament but a religious, solemn and sacred covenant for life. 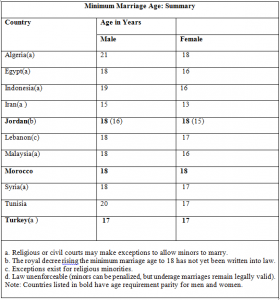 There is no need for registration in a Muslim marriage as it is not obligatory in the Quran or in the Sunnah. On the other hand there is no prohibited sanction against registration of marriage. Thus registration is not a requisite of a valid marriage but provides a legal restriction for various kinds of protection, including prevention of denial of the marriage.  Marriage  registration continues to vary among Muslim countries.

Tunisia: obligatory under Civil Status Act 1957, only formal document shall prove existence of marriage; unregistered marriage deemed void with three effects: establishment of paternity; immediate onset of idda from date of voidance declaration; and creation of prohibited degree on basis of affinity.

Senegal: obligatory; if marriage contracted under one of customary legal regimes recognized in Senegalese law, parties must inform officer of civil status one month prior to marriage; non-registration is punishable by fine but does not determine validity.

Islamic countries are addressing the issue of polygamy in different ways. One group of countries, including Tunisia, Turkey, and in part Lebanon, simply bans the practice outright. A second group restricts the practice, applying conditions that, in some cases, are quite rigorous to deter a frivolous exercise of multiple marriages.

Polygamy rule is to vary among Muslim countries.

Tunisia: A Personal Status Code was adopted in Tunisia shortly after independence in 1956, which other laws, prohibits polygamy.3 Under Article 18 of the Personal Status Code, any man who contracts a polygamous marriage is punishable with one year of imprisonment, a fine of 240,000 Tunisian francs, or both.

Turkey: In 2001, Turkey completed a sweeping overhaul of its Civil Code, with one outcome being a ban on polygamy. 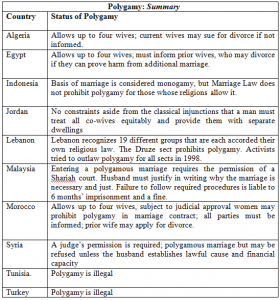 Lebanon:4 In Lebanon, according to the 1948 Law Pertaining to Personal Status for the Druze Sect (Article 10), polygamy is prohibited. Article 9 of the 1998 Civil Marriage Law, proposed by activists but not yet passed, would outlaw polygyny.5

Malaysia: Contracting a polygamous marriage requires the permission of a Shariah court. A husband must justify in writing why the additional marriage is necessary and just and must convince the court that he can treat all wives equally. Failure to follow required procedures is liable to 6 months’ imprisonment and a fine.6

Indonesia: Under a 1990 policy, polygamy is permitted only through an application to the court and requires approval of the prior wife or wives, a necessity for the marriage (current wife suffers from an incurable disease or is infertile, etc.), and a guarantee that husband will treat all wives and children justly.7

Iraq: Only permitted by judicial permission, to be granted on two conditions: financial ability and lawful benefit; permission not to be granted if judge fears unequal treatment of co-wives; ILPS provides penalties of imprisonment and/or fines for non-compliance.

Morocco: Only permitted by judicial permission, to be granted on two conditions: financial ability and lawful benefit; permission not to be granted if judge fears unequal treatment of co-wives; ILPS provides penalties of imprisonment and/or fines for non-compliance.