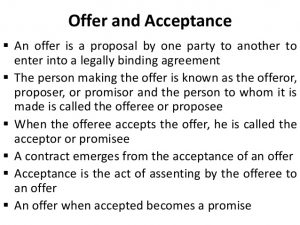 A contract is a binding agreement between at least two parties.

In order to form a contract, the essential elements are:

The parties must clearly have intended their agreement to be legally binding. For example, a mere social arrangement – such as an agreement with a friend to meet for a meal – will not normally be treated as a contract. [Parker v. Clark (1960) 1 W.L.R. 286.]

An offer is a promise to do or not to do something in sufficiently clear terms that may be accepted by another. An offer should be distinguished from an invitation to treat and a mere expression of intention to do or not to do some act. Offers do not necessarily need to be made to one person – that may be made to the world at large or to specific groups of people. The significance of an offer is that when it is accepted, the contract is formed. In addition to being accepted, an offer may be rejected, a counter-offer may be made, the offer may lapse or the offeror may withdraw the offer, such that it is no longer available to be accepted.

The acceptance of the offeror’s terms must be unconditional. In many cases this may constitute a ‘yes’ or ‘no’ reply to an offer made. There are situations where such a simple exercise may not be possible and it requires the courts to give direction as to how acceptance may be established. An offer may be accepted by conduct; silence, however, can never constitute acceptance.[Smith v Hughes 1871]

As a general rule, everyone is capable of entering into contracts. There are, however, some exceptions. Most importantly, some artificially created bodies such as local authorities are only entitled to do the things for which they were created or which have been specially authorised. Anything else is ultra vires (outside of its powers) and therefore void. Another example of lack of capacity is that infants (those under 18) may not be bound by some of their contracts.

(a) – (i) Describe what is meant by the term ‘Occupiers’ Liability’.

The law of occupiers’ liability is a common law tort meaning it is actioned in a civil court and deals with issues between individual parties. Under occupiers liability the person who occupies the land can be held liable when injury or some kind of harm has occurred to another person on that land.It is governed by the Occupiers Liability Act 1957 and the Occupiers Liability Act 1984.[Wheat v Lacon – 1966 – HL]

(ii) Discuss whether there is a distinction between visitors and trespassers under the law.

The Occupiers’ Liability Act 1957 regulates occupiers’ liability to visitors. S 1(2) of the Act defines “visitors” as persons to whom the occupier gives (or is to be treated as giving) an invitation or permission to enter or use the premises. In other words, visitors are persons who have the express or implied permission of the occupier to be on the premises. A visitor who exceeds the occupier’s permission, e.g. by going to the part of the premises where he was told by the occupier not to go, or by outstaying his leave, will become a trespasser and will fall outside the sphere of application of the Act. He will then be in the sphere of application of the Occupiers’ Liability Act 1984, with lower standards of protection.

“Visitors” for the purposes of the Act are also persons who enter premises for any purpose in the exercise of a right, whether they in fact have the occupier’s permission or not. Police carrying out a lawful search or firefighters in the exercise of their duties will fall into this category. [Stone v Taffe – 1974 – CA], [Gould v McAuliffe – 1941 –CA]

(b) Briefly describe the tort of trespass and give examples where a person’s action has been ruled by the courts to constitute trespass.

Trespass to land occurs where a person directly enters upon another’s land without permission, or remains upon the land, or places or projects any object upon the land. This tort is actionable per se without the need to prove damage. [Basely v Clarkson (1681) 3 Lev 37]

Private nuisance: Private nuisance is a continuous, unlawful and indirect interference with the use or enjoyment of land, or of some right over or in connection with it. Proof of damage is necessary. [Cambridge Water v Eastern Counties Leather-1994].

Public nuisance: Public nuisance is an act “which materially affects the reasonable comfort and convenience of life of a class of Her Majesty’s subjects”: per Romer LJ in A-G v PYA Quarries [1957]. [Halsey v Esso Petroleum-1961]

A private nuisance is a civil wrong; it is the unreasonable, unwarranted, or unlawful use of one’s property in a manner that substantially interferes with the enjoyment or use of another individual’s property, without an actual trespass or physical invasion to the land. A public nuisance is a criminal wrong; it is an act or omission that obstructs, damages, or inconveniences the rights of the community. A public nuisance interferes with the public as a class, not merely one person or a group of citizens.

(d) Elements of the tort of negligence. How to establish that a ‘duty of care’ is owed?

Generally, to establish the tort of negligence, the following elements must be present:

The defendant must not be able to raise a defence to the claimant’s civil action.

To establish that a duty of care is owed, there must be:

Freehold: If you purchase a freehold property, you will own the home, the land it is built on, and you will have the right to live there for as long as you please. You can make moderations to the property within restrictions of the law and planning restrictions. You may need permission to make structural changes, particularly with listed buildings (old buildings).

Leasehold: If you buy a leasehold property you are actually buying the rights to live in a property for a set period of time. You won’t actually own the property, or the grounds it is situated on. Most flats are leasehold; with the lease, it means you are obligated to pay ground rent to the freeholder. The ground rent will cover the costs for communal maintenance repairs. The lease should stipulate how the service charge is worked out, and how it is divided between the other leaseholders. Once the set period in the lease expires, the ownership of the property is given back to the land owner. Most leases are roughly 99 years; however, you can get an extension

Commonhold: Like leasehold, this type of property is usually found with flats and units. Most strikingly, commonhold eradicates the concept of a lease and having a landlord. That’s what most appeals to buyers, and why it is favoured over leasehold. Commonhold is pretty self-explanatory. A group of people mutually own, for example, a block of flats. There is no overall landlord. However, there is a freehold owner, and that is a company called a commonhold association. The owner of each flat is a member of the association (i.e if you buy a commonhold flat, you will be part of the association). The commonhold association is responsible for maintaining the communal areas of the building.

Easements: These are the rights which are attached to the land of one person (the dominant land), and are exercised over the land of another person(servient land).[Hawkins v Rutter;1892]

Restrictive covenants: These are another form of interest in land, and defined as restrictions upon the use of a person’s land for the benefit of another person’s adjoining/nearby land.[Tulk v moxay;1848]

(b) Stages involved in the formal purchase of a free hold property (formal acquisition of land).

(c) Roles and responsibilities of the land Registry; types of information it holds on ‘Registered land’; registers/documents which may be obtained from the land registry.

The main purpose of the land registry is to register title to land in England and Wales and to record dealings (for example, sales and mortgages) with registered land.

Their principal aims are:

to maintain and develop a stable and effective land registration system throughout England and Wales as the cornerstone for the creation and free movement of interests in land;

on behalf of the Crown, to guarantee title to registered estates and interests in land for the whole of England and Wales;

to provide ready access to up-to-date and guaranteed land information so enabling confident dealings in property and security of title;

to achieve progressively improving performance targets set by the Lord Chancellor, so that high quality services are delivered promptly and at lower cost to users.

It holds information such as the title of the registered document; its title number, classes of title, overriding interests, guarantee and indemnity; the title plan, boundaries of registered land; how to discharge a registered charge.

There are three parts of the register namely the property register, the proprietorship register and the charges register which can be obtained from the Land Registry.

The property register contains a description of the land in the title. It also refers to a title plan, which is prepared for each title. It may also give details of any rights that benefit the land, such as a right of way over nearby land. In the case of a leasehold title, it gives brief details of the lease. The title plan is based on the large-scale maps of the Ordnance Survey.

The proprietorship register gives the quality of the title, such as an absolute title, and the name and address of the legal owner, and shows whether there are any restrictions on their power to sell, mortgage or otherwise deal with the land. When we are completely satisfied about who owns the property we will give absolute title. In some cases, however, we will give a more limited class of title.

What liability do I have towards other people entering my property. Available: http://www.inbrief.co.uk/occpiers-liability.htm. Last accessed 7 April 2010.