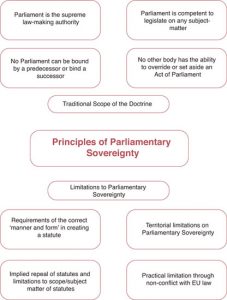 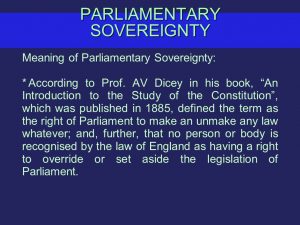 Meaning of Parliamentary Sovereignty: According to Prof. AV Dicey in his book, An Introduction to the Study of the Constitution , which was published in 1885, defined the term as the right of Parliament to make an unmake any law whatever; and, further, that no person or body is recognised by the law of England as having a right to override or set aside the legislation of Parliament.

The UK constitution is often described as an ‘unwritten constitution’, but it is best described as ‘partly written and wholly uncodified’ (Budge et al, 1998). The main source being the statues , laws enacted by the parliament;thus giving the parliament the absolute power to make and unmake laws in the whole of UK. For example in 1984 the Government banned the Government Communications Headquarters (GCHQ) trade union based on untenable arguments which was eventually reversed by the incoming Government in 1997. Dicey (1964) considered parliamentary sovereignty as the primary constitutional principal and all else subordinate to this principal. The primary contention of Dicey’s principal is that in constitutional democracy power should not be absolute and it should be controlled. The fundamental question is under what circumstances can courts question or modify a act of parliament.

Public law disputes are resolved through the mechanism of Judicial Review and stop the misuse of power to safeguard the interests of the people. Decisions of public authorities can be challenged in the courts by way of “judicial review” a process by which legislative and executive decisions are reviewed by judges to ensure that they are lawful. The purpose of judicial review is to ensure that public authorities don’t go beyond the powers given to them by parliament and that they don’t abuse those powers. Public law is generally concentrated on the control of the Government. Wade and Forsyth(2004) have indicated that the primary purpose of administrative law is to keep the powers of government within their legal bounds, so as to protect the citizen against their abuse. This control is sometimes affected by use of the courts and judicial review provides one (of a number) of legal controls on administrative actions. Decisions of the public authority can be challenged by the courts by way of Judicial Review. The court does not look at the technicalities of the decision but is only concerned with the lawfulness of the decision.

The central discussion questions the validity of Judicial review in a political world. Do we need Judicial Review? The core defence of judicial review is offered by Hamilton(1961) in the Federalist Papers. It is worth noting that Hamilton primarily envisioned the institution of judicial review as a useful check on the temporary missteps of legislative majorities. The judiciary is not positioning itself against permanent majorities; it is not trying to tell legislative majorities or the people that they cannot have what they are convinced that they want. Rather, in particular moments when the people have lost their heads, the courts might step in and offer some corrections and appeal to the more sober sense of the people. Judicial review is an essential safeguard to maintain the standards of law and is also needed to protect democracy in difficult times. Primarily the Judiciary tries to correct badly drafted legislation and challenge the legislators when their action might result in in justice to the people.

Lately, there have been significant incursions into parliamentary rule. There have been two chief mechanisms, one international and the other domestic. With the UK becoming the member of the European Community in 1973 many of the traditional views on Parliamentary Sovereignty have seen a gradual change. The landmark decision in Factortame Ltd v Secretary of State for Transport gave the impetus to British courts the power to set aside an act of Parliament.

More recently, the incorporation of the European Convention of Human Rights into United Kingdom domestic law by the Human Rights Act 1998 has led to greater involvement of courts in considering the “constitutionality” of parliamentary statutes compatibility with Convention requirements.

In the A and others v Secretary of State for the Home Department (2005) case, the Home Secretary who had allowed evidence obtained outside the UK by torture to be used as evidence at a hearing of the Special Immigration Appeals Commission (SIAC). The evidence was used to detain, without trial, eight men at Belmarsh prison. The argument against the government was that the European Convention forbids torture and therefore any such evidence obtained through such treatment of anyone cannot be admissible in a British court. It was Held: Unanimously, the common law developed over centuries should take precedence over SIAC’s practices. The ruling required Home Secretary to review all other cases where evidence used to convict terror suspects was obtained from sources kept secret. This was a huge embarrassment for the Government , the Judiciary ruled against the Government’s approach to terrorism and it forced ministers to draw up fresh legislation to replace it.

Where the courts are unable to interpret statutes in a manner which makes them compatible with Convention rights, a declaration of incompatibility under s. 4 HRA 1998 may be issued. This puts the government and Parliament ‘on notice’ that the statute requires amendment (R (Anderson ) v Secretary of State for Home Dept (2002) HL).The changing landscape is seeing Judges call upon inner parliamentary discussions as an aid to interpret the statutes. Further the Human Rights Act has changed the relationship between the courts and Parliament. Using the power conferred under section 3 and 4 courts are able to limit the autonomy of the Parliament over the legislative process.

There has been a consistent struggle between the Executive and the Judiciary as seen in some of the recent promulgations. The Asylum and Immigration (Treatment of Claimants etc.) Act, 2004 looks at reducing the power of Judiciary. It replaces the previous system of immigration adjudicators and the immigration appeal tribunal with a single-tier asylum and immigration tribunal. Controversially, it also removes judicial review, cutting off all appeals to the court of appeal and the House of Lords except in cases that involve an error of law. This is not only a curb on the power of the Judiciary but the case of Executive using arbitrary power to overrule all civil liberties and human rights.

Corresponding similarity can be seen with other legislations after 9/11 and 7/7 in the form of the Regulation of Investigatory Powers (Communications Data) Order 2003, Regulation of Investigatory Powers Act, 2000 and the Anti-Terrorism Act, 2001 which denies terror suspects the right to privacy and civil liberties by giving the executive an overarching power to investigate terrorism and money laundering. The above pieces of legislation reduce the role of the Judiciary by denying the victims the right to appeal regarding the unfair practices which are mandated by the writ of law. Under these circumstances Judicial review becomes significant in guarding the rule of the law and guarantee a free and fair trail while opposing the suppression of democratic values.

The rule of the Law has played a important role in broadening the scope of Judicial review. Series of decisions of the House of Lords in the last few years have breathed new life into the rule of law. judicial independence is now insulated from other branches of government by the rule of law. This may be called a constitutional fundamental of our system of government. Challenging that system would now be difficult. In Anufrijeva (2004) by a majority of 4:1 the house held that uncommunicated decision has no legal effect. The House observed:“The arguments for the Home Secretary ignore fundamental principles of our law. Notice of a decision is required before it can have the character of a determination with legal effect because the individual concerned must be in a position to challenge the decision in the courts if he or she wishes to do so. This is not a technical rule. It is simply an application of the right of access to justice. That is a fundamental and constitutional principle of our legal system. Clearly this is a wide application of the rule of law, beyond earlier categories. The constitutional impact of the decision is clear.

The classic account given by Dicey of the doctrine of the supremacy of Parliament, pure and absolute as it was, can now be seen to be out of place in the modern United Kingdom. What is at issue in all of these concerns is the entire business of good government. Two central concerns are democracy and human rights. The fundamental question about democracy does not stop at the legislative and executive branches of government. If we are serious about democracy then it too must play a role in the judicial branch. Judicial review may act as a filter by providing a chance for the lawmaking community to express second-thoughts or critical reflection concerning legislation and other governmental conduct. Ultimately, however, democracy is committed to the proposition that the electorate after refining its judgement deliberatively through its representatives and other institutional procedures is the final arbiter of constitutional meaning.