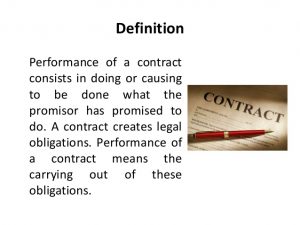 Specific performance is an equitable remedy that can be awarded for breach of contract, requiring the party to perform their obligations under the contract.1 The general principle is that specific performance will only be awarded where damages would not offer a suitable remedy to the claimant.2 This has been deemed by the courts to include circumstances where the loss incurred is not possible to quantify;3 where only nominal damages can be claimed;4 or where the contract relates to unique goods that cannot be obtained elsewhere.5 Moreover the current approach of the courts is that specific performance will only be awarded where it requires no element of personal performance.6

The difficulty with this approach is that it entitles a contracting party to break their obligations under the contract especially where the contract has become more costly to perform. Whilst damages may be available they may not reflect the cost of performing the contract and hence will often put the breaching party in a better position than they would have been in had the contract been performed.7

Co-operative Insurance Society Ltd v Argyll Stores (Holdings) Ltd is the leading case on the application of the specific performance doctrine; it outlines the restrictions that have been developed through common law.8 The first principle outlined identified that specific performance could not be instigated through an injunction that required the carrying on in business and this was especially so where the business was loss making.9 Where it is a commercial transaction the remedy of damages will usually be considered to be adequate,10albeit that the courts are likely to favour the plaintiff in making such an award.11 Secondly, the courts will not award specific performance unless the order is sufficiently clear and precise as to what is to be done.12 In this context the courts distinguish the requirement to trade from a building contract which is defined as to the precise work that is to be done.13 The Court identified that it was not sufficient to attribute prior work to the order for specific performance on the basis that the defendant would be entitled to perform their obligation in a number of ways. In this regard, the Court considered that the performance could be achieved to the letter but not the spirit of the order. Thirdly, a continuing order to perform obligations under the contract indefinitely gives rise to situations where the Court would be repeatedly required to interpret and enforce the order.14 Moreover, changes in trading practices are likely to present difficulties in respect of interpretation of the order. This reason relates to the possibility that specific performance could, if operating on a continuing basis, act as an object of oppression, creating financial hardships and this should be prevented.15 Fifthly, the Court will not be able to determine in an order the quality or the scale of an order and thus it would be possible for an order to be performed in a lacklustre manner that would not offer any real benefit for the party relying upon it.16 The sixth reason, identifies that certain orders, such as the continuance of a business can impose significant restrictions on commercial freedom and market flexibility which is undesirable.17 The seventh reason identified by the Court, was that the granting of an order for specific performance allowed the plaintiff the potential to extract a greater sum from the defendant for realise from the order, than they would have received if damages had been awarded.18 The final reason identified by the Court is the need for certainty in business and in this regard damages offered greater certainty to the parties than specific performance.19

The rationale provided is therefore not that specific performance should not be available but merely that it should not be used where damages represent an adequate remedy. This is depicted by Lord Selborne in Wilson v Northampton and Banbury Junction Railway Co when he stated specific performance could be used to ‘do more perfect and complete justice’ than would be the result of leaving the parties to their remedies at common law.20 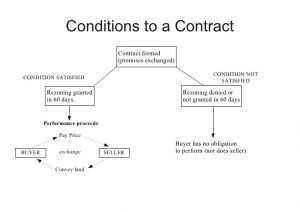 The Issue of Supervision

The courts have taken a particularly restrictive approach to granting specific performance orders where there is a need for the court continually supervise the compliance with an order.21 Nonetheless, in C.H. Giles & Co. Ltd. v. Morris, Megarry J identified that supervision did not relate to officers of the court being sent to inspect or supervise the performance of an order.22 The courts concern was primarily related to consequences of the order, which if breached the punishment was transferred to contempt of the court.23 Lord Hoffmann identified that:

“the only means available to the court to enforce its order is the quasi-criminal procedure of punishment for contempt. This is a powerful weapon; so powerful…. that it is often unsuitable as an instrument for adjudicating upon the disputes which may arise over whether a business is being run in accordance with the terms of the court’s order”.24

Lord Hoffmann additionally identifies that the serious nature of the breach, punishable with imprisonment, will inevitably increase the cost of bringing an action to enforce the order.25 In this context, he makes the argument that enforcement over a period of time is likely to be more expensive to the parties than a single order of damages.26

Whilst it is acceded that the argument against constant supervision has a number of merits, there is concern in relation to the enforcement arguments. Failure to pay an award for damages is likely to result in further court orders being made for enforcement, which would also incur substantially increased costs. This undermines the additional costs argument that Lord Hoffmann uses as a justification for restricting the doctrines use.

In Shiloh Spinners Ltd v Harding, Lord Wilberforce was unconcerned with the issue of supervision as to the completion of the work.27 “The court has to do is to satisfy itself, ex post facto, that the covenanted work has been done, and it has ample machinery, through certificates, or by inquiry, to do precisely this”.28 This is a case where specific performance was awarded and as the case involved the ongoing repairing covenant under a tenancy agreement. Therefore, this undermines the arguments against the use of specific performance where it requires supervision as the courts are sufficiently able to undertake ongoing supervision where necessary. 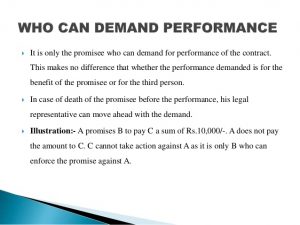 In Falcke v Gray, the Court assessed whether a contractual bargain was capable of specific performance and held that it was not.29 In this case the plaintiff knew the value of the vases greatly exceeded the £40 offered and that the defendant did not know their true value, which exceeded £200. This case undermines the basic principle of contract law that the parties do not need to come with equal bargaining power.30 Falcke v Gray allowed the defendant to escape the contract without apparent penalty as the order of specific performance was dismissed without costs and there was no discussion of the damages to be awarded in its place.

Contracts are frequently entered into at a time when a parties bargaining power is high but subsequent changes in commodity prices can quickly render a contract to be uneconomic to one of the parties.31 In relation to construction contracts the courts are willing to order specific performance on the basis that the work is sufficiently precise and defined so that the court would be properly able to supervise an order. It is however, submitted that construction contracts are particularly risky for the parties as they can reveal many unforeseen problems.32 It is arguable that the court can therefore assume that the work can be completed to a specified standard at a specified time, factors which are deemed to be prerequisites to an order for specific performance being granted.33 This however, appears to be the primary area where specific performance is allowed despite a need for supervision.

The courts approach to the doctrine of specific performance is somewhat restricted and there are many rules in place. These rules, seek to arbitrarily define who would be entitled to an order and who would not. Nonetheless, they forget the very nature of contract law in which, the parties are free to contract on whatever terms that they choose however disadvantageous that may be. In this context specific performance as a contractual remedy should be either removed or made more widely available as the current approach is inherently unfair. What is certain is that the current position favours the contract breaker on the basis that they can avoid a contract that has become more expensive to perform than damages would cost.