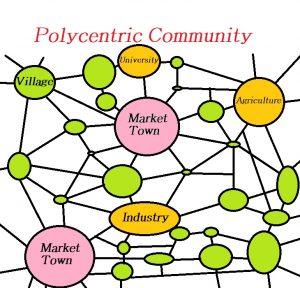 Polycentric law is a legal structure in which providers of legal systems compete or overlap in a given jurisdiction, as opposed to monopolistic statutory law according to which there is a sole provider of law for each jurisdiction.

Devolution of this monopoly occurs by the principle of jurisprudence in which they rule according to higher law.

Tom W. Bell, former director of telecommunications and technology studies at Cato Institute, now a professor of law at Chapman University School of Law in California wrote “Polycentric Law,” published by the Institute for Humane Studies, when he was a law student at the University of Chicago. In it he notes that others use phrases such “non-monopolistic law” to describe these polycentric alternatives. He outlines traditional customary law (also known as consuetudinary law) before the creation of states, including as described by Friedrich A. Hayek, Bruce L. Benson, and David D. Friedman. He mentions Anglo-Saxon customary law, church law, guild law, and merchant law as examples of polycentric law. He notes that customary and statutory law have co-existed through history, as when Roman law applied to Romans throughout the Roman Empire, but indigenous legal systems were permitted for non-Romans. In “Polycentric Law in the New Millennium,” which won first place in the Mont Pelerin Society’s 1998 Friedrich A. Hayek Fellowship competition, Bell predicts three areas where polycentric law might develop: alternative dispute resolution, private communities, and the Internet.

The University of Helsinki (Finland) funded a “Polycentric Law” research project from 1992 to 1995, led by professor Lars D. Eriksson. Its goal was to demonstrate “the inadequacy of current legal paradigms by mapping the indeterminacies of both the modern law and the modern legal theory. It also addressed the possibility of legal and ethical alternativies to the modern legal theories” and “provided openings to polycentric legal theories both by deconstructing the idea of unity in law and re-constructing legal and ethical differences.” The project hosted two international conferences. In 1998 the book Polycentricity: The Multiple Scenes of Law, edited by Ari Hirvonen, collected essays written by scholars involved with the project.

Professor Randy Barnett, who originally wrote about “non-monopolistic” law, later used the phrase “polycentric legal order.” He explains the advantages of such a system in his book The Structure of Liberty: Justice and the Rule of Law.

Bruce L. Benson also uses the phrase, writing in a Cato Institute publication in 2007: “A customary system of polycentric law would appear to be much more likely to generate efficient sized jurisdictions for the various communities involved — perhaps many smaller than most nations, with others encompassing many of today’s political jurisdictions (e.g., as international commercial law does today).”

John K. Palchak and Stanley T. Leung in “No State Required? A Critical Review of the Polycentric Legal Order,” criticize the concept of polycentric law.

Legal scholar Gary Chartier in “Anarchy and Legal Order” elaborates and defends the idea of law without the state. Animated by a vision of peaceful, voluntary cooperation as a social ideal and building on a careful account of non-aggression, the book seeks to explain why the state is illegitimate, dangerous, and unnecessary. It proposes an understanding of how law enforcement in a stateless society could be legitimate and what the optimal substance of law without the state might be, suggests ways in which a stateless legal order could foster the growth of a culture of freedom, and situates the project it elaborates in relation to leftist, anti-capitalist, and socialist traditions.

Do you like having options when you look for a new bank, dry cleaner, or veterinarian? Of course you do. You want to find the service that will best satisfy your particular demands, after all, and you know that when banks, cleaners, and vets have to compete they have a powerful incentive to make you happy. A monopoly, in contrast, can take its customers for granted.

Polycentric law simply extends that observation from commercial services to government ones. Just as competition makes life better for those who seek banking, cleaning, and pet care services, it can benefit those seeking fair and efficient legal systems. Competition helps consumers and citizens alike.

Polycentric law regards the legal services that governments provide—defining rules, policing their application, and settling disputes—as a ripe field for competition. When a government claims a monopoly in the law, it tends to neglect its subjects’ needs. In a polycentric system, however, providers of legal services care more about what consumers want. They have to, if they don’t want to go out of business.

But won’t competition between legal services lead to chaos? Evidently not. We already live in a world that offers us a degree of choice between the sorts of rules we live under. Polycentric law simply takes note of that fact, sees the good in it, and argues for more of the same.

It may not always seem as if you can choose the legal system you will live under. If you like the culture and climate of United States, for instance, but not the commands that issue from the federal government, you indeed face a hard choice: Suck it up or hit the road.

And even if you do decide to leave in search of a better legal system, you have no guarantee of finding one. Because they typically impose uniform rules across large geographic areas, governments tend more toward monopolistic law than polycentric law.

Even so, excepting totalitarian regimes such as the former Soviet Union and present-day North Korea, most governments allow disgruntled residents the freedom to escape to better legal systems. Most also allow movement within their borders, from one state, county, or town to another, affording the freedom to choose between local legal systems. To some degree, therefore, governments already compete against each other. But the influence of polycentric law goes deeper than that.

To fully understand the extent of polycentric law, you have to understand the nature of law itself. Legal philosopher Lon Fuller aptly described it as “the enterprise of subjecting human conduct to the governance of rules.” So described, the law is not just a service provided by public organizations. It also issues from private sources such as homeowners’ associations, businesses, religions, clubs, and myriad other organizations, all of which subject their members’ conduct to the governance of rules.

That may not sound much like a conventional government—until you realize that many residential co-ops rival cities in terms of their size and range of operations. The largest of them, Co-Op City in New York’s Bronx borough, houses over 50,000 members. In addition to shelter, Co-Op City provides an elected government, parks, streets, security, and just about every other service you might expect from a traditional municipality.

Homeowners’ associations (HOAs) likewise often grow as large and as capable as cities. The largest HOA in the United States, Highlands Ranch, Colorado, includes over 30,000 homes and 90,000 residents. In all respects but its origins and legal status, it resembles a conventional municipality.

Other private organizations also effectively duplicate cities on a small scale. Malls and hotels, for instance, provide their users with transportation networks, shelter from the elements, utilities, fire protection, security, and (most pertinently for present purposes) rules of conduct.

The scale and scope of residential co-ops, HOAs, malls, and hotels make it easy to see how the private sector can rival the public one in providing governing services. Polycentric law is not solely the province of huge private communities, however. Under Fuller’s definition, even a small organization that regulates only a narrow range of behavior—a church that imposes strict dietary rules on its members, for instance—also qualifies as a source of law. Size and breadth matter less than whether the organization subjects human conduct to the governance of rules.

We already live in a somewhat polycentric world. Except when they completely imprison their subjects, governments already compete against each other for financial and human capital. In the long run, as a consequence, governments that fail to supply adequate legal services tend to end up poor and unpopulated. Alas for consumers of governing services, though, that “long run” can last for generations.  For governments to become better, faster, they must face more competition.

Intermediary institutions likewise already form a somewhat polycentric legal order. Towns compete with residential co-ops and HOAs to provide housing arrangements, main streets compete with malls to provide shopping environments, religious institutions compete with each other to provide moral instruction, and so forth. Because each of these institutions subjects human conduct to the governance of rules, each provides a form of law. This market in legal services could use more competition, too.

How can we make our world more polycentric?  We can start by recognizing that legal systems do not differ in principle from banks, vets, cleaners, or other services. All face some competition and, insofar as they do, consumers benefit. Legal systems differ from other services not because they escape the effect of market forces, but because they have for too long pretended to do so.

Once we recognize that competition already shapes legal services, we can turn to increasing its influence. We should seek ways to make it easier for disgruntled subjects to flee, either physically or virtually, from bad governments to better ones. Bitcoin and other cryptocurrencies, for instance, seem likely to help on that front. And we should encourage the rise of special jurisdictions, such as the ZEDE/LEAP zones recently launched in Honduras, where locals can opt into legal rules imported from abroad.

From a Good World to a Better One

Far from a mere theoretical ideal, polycentric law already shapes our world. We need only appreciate its latent power and invite more of the same. Once more fully realized, polycentric law can give consumers of the law the same benefit that free and open competition already gives to the consumers of banking, cleaning, and veterinary care: excellent consumer service.