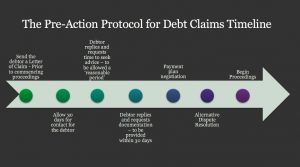 In April 1999 the civil claim procedure known as Legal Aid was replaced by the Civil Procedure Rules (CPR). These are also sometimes known as The Woolf Reforms because they were instigated by Lord Woolf, the then Master of the Rolls.

The main aim of CPR is to speed up the whole pre-trial process and, by its very nature, increases the likelihood of a case being settled out of court. A solicitor will only get paid at the end of a case, which he has to win, so it eliminates “no hope” cases. By only taking on cases with a strong likelihood of winning (and therefore being paid) it is in the solicitor’s interests to speed things along. Cases that do go to court will also be dealt with more quickly.

Pre-action protocols are a series of steps to be taken by a person who wishes to bring a claim to court. These steps are intended to be easy to follow and to ensure that everyone involved is aware of the problem in dispute and what each ‘side’ states has happened.

They are not strictly part of the Civil Procedure Rules and don’t have the same status as those rules.  However, they have been put together by professionals and apply to certain types of claim. They should be followed by anyone who thinks they may have a dispute which may require litigation in court.

Currently, there are protocols in place for 12 different types of claim, meaning not all disputes have a pre-action protocol in place to follow.

If there is no pre-action protocol, parties should follow a practice direction called the ‘Practice Direction – Pre-action Conduct’.  Further information can found here

This aims to give some guidance on what should happen before anyone considers involving the courts. It states what should go into letters sent between the potential claimant and defendant.

The purpose of the pre-action protocols is very clear and covers the following:

The principle behind this is that all parties should attempt to discuss a solution; settlement of the dispute is possible in all but a minority of cases. Where a party refuses to act in a suitable way and the case goes to court, the party who has failed to attempt to sort out the problem may have to pay the costs of the other party. If there is no named pre-action protocol, the Pre-action conduct – practice direction should be followed. They must ensure that everything they do is in accordance with the Overriding Objective as discussed in an earlier article.

There are some common elements throughout each of the protocols and pre-action conduct guidance, including how to write the initial letter. There is also guidance on the way a potential defendant should respond and details relating to the exchange of information and documents by the parties.

Anyone considering litigation should always ensure that they collect together all relevant information, documentation and reports and keep them safe until they need to be produced (‘disclosure’).

Most importantly, each protocol encourages the use of ADR.  In most cases, ADR will provide a more cost-effective means of reaching an agreement over the issue.  The protocols also contain a suggested timeframe during which proceedings should not be issued at court to allow the parties to consider their positions and the wisdom of proceeding.

A person wishing to consult a solicitor should be aware that it may take several weeks or months to complete the pre-action steps. Those consulting a solicitor often believe they will be able to jump straight into court proceedings and obtain a ‘fix’ from the court. This is no longer the case, and a person would be badly advised to attempt to do this.

Where a person is unrepresented (that is, they do not have a solicitor guiding them through the pre-action steps), they should still try to follow appropriate pre-action conduct.  However, it is advised to seek legal advice on such matters.

Pre-action protocols are simply steps to be completed before issue of a claim at court. They are written in an understandable way and are there to ensure that as many problems as possible can be resolved without the need for a court hearing.

Before a case goes to court, a defendant’s solicitor may make a financial offer. Under Part 36 of the CPR this offer is made without admitting liability, or without prejudice, and it cannot be disclosed. The claimant’s solicitor must advise his client whether or not to accept the offer by comparing similar settlements in like cases.

If the claimant ignores his solicitor’s advice and continues with court proceedings he will not be covered by the terms and conditions of the Conditional Fee Agreement (explained in another essay).If the judge later finds in favour of the claimant and makes an award which is the same amount or less (even by £1) than made in the without prejudice offer, the claimant will have to pay all costs out of his award. In other words, the claimant’s award in court would have to be greater than the without prejudice offer in order to make the defendant pay costs.

Pre- Action Protocol is defined as taking action without using a solicitor or lawyer. As an investigator, this is most likely to happen when a friend who has had a personal injury accident asks your opinion on whether he has a case. (He may have already been rejected by a solicitor). If, after studying the case, you believe he may have a claim, you can instigate procedures which will enable you to acquire details of relevant records from the organisation or company that the claimant holds liable.

For a work related accident, this would allow you to request details of the friend’s employment, training and Health and Safety records (as in Wallace v Nth Cambs). For a Slip/Trip as in the case of Wilson v Megastores, you would be instigating procedures against Megastores Supermarket and requesting details relevant to their Health and Safety and training records. If the Slip/trip was against a council, (as in the case of Beryl Sharpe, Module 2 page 39) you would write to them requesting records relating to Highways Inspections and maybe Customer Relations letters and/or telephone logs. You must, however, explain to your friend the way CPR and Part 36 works so that he fully understands that he may be ultimately liable for costs. If his case has already been rejected by a solicitor, proceeding with litigation is a big risk.

If you were to become involved in a pre-action protocol, the first thing you must do is send a Letter of Claim to the person or company you hold responsible, (see my work on Wallace v Nth Cambs). This letter is addressed to the defendant and must include full details of the claimant – full name, address, works number or National Insurance number and the name and address of the claimant’s employer. The letter must then state the type of accident and the date and place it occurred. Details of the defendant’s insurers are requested. A brief outline of the accident is given, then a simple explanation of why the defendant is deemed to be at fault. A description of the claimant’s injuries follows, with details of where he received treatment. Next is a statement of the claimant’s occupation, time off work and income details. If the letter is addressed to the employers then a request could be made for details of earnings. If a police report is applicable (for a RTC) you would offer a copy upon payment of half the fee. If another party is involved you would attach a copy of the Letter of Claim sent to them, and state their name, address and insurance details.

The next part of the letter requests documents relevant to the case which are already likely to be held by the defendant. From the standard disclosure list you would name which documents were required for that particular claim, and this may vary depending on the type of claim. For a work related claim such as Wallace v Nth Cambs you would request parts (i) to (x) from the list:

The final part of the Letter of Claim requests the production of documents which comply with specific regulations relating to statutory legislation. For a work related claim, as in Wallace v Nth Cambs, the defendant could be asked to produce documents relating to;

Each of the above regulations would detail the particular section and/or sub-section which applies. (See Module 4 page 79). A work accident in an office environment would not necessarily request documentation relating to regulations concerning personal protective equipment or manual handling. Each letter of claim would have to be individually tailored to the specific incident and claimant.

The letter would close with a request for acknowledgement within 21 days from the defendant or their insurers. You would include a copy for forwarding on to their insurance company.

Following the Letter of Claim a set procedure must be adhered to and is as follows:

This document is issued by a solicitor when no settlement has been possible under a Part 36 offer. It is a short statement of the claim being made and outlines the relevant Health and Safety Regulations that have been breached. This is sent to the defendant with a full report of the incident (which has been carried out by you, the investigator).