The term “probation” refers to a variety of alternatives to incarceration. It is also known as “community supervision” or “suspended sentencing” in some circumstances. Probation is common for many first offenders and juvenile criminals. If the defendant meets all of the court-ordered conditions during the probation period, the court will release the defendant from further obligation. If the defendant fails to meet one or more conditions, however, prosecutors may ask the court to revoke probation, which could result in imposition of the original sentence.

The purpose of probation is to test the criminal’s behaviors and their ability to become active members of the society once again. When an offender is on probation, they are ordered to follow specific conditions that were set forth by the court, often times under the supervision of a probation officer.

Common conditions of probation would prohibit the offender from owning or using a firearm, they may have to abide by a curfew, they may have to remain actively employed, and they may be ordered to live at a specific location. They will usually be told to follow any orders made by their probation officer and this may include not leaving the jurisdiction and it can involve not having any contact with their victims (as in a domestic violence case). 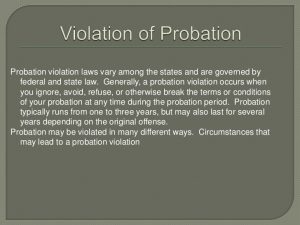 A court typically orders probation as part of a plea agreement, in which a defendant enters a plea of not guilty or nolo contendere in exchange for a lesser sentence. The court makes a final adjudication and pronounces a sentence, but it also orders that the sentence be probated for a defined period of time. For example, a judge may sentence a defendant to six months in jail but probate that sentence for five years. The defendant is therefore “on probation” for five years.

Two other possible dispositions that resemble probation are deferred prosecution and deferred adjudication. Probation generally occurs after the entry of a plea, meaning that the case has resulted in a conviction. Under a deferred adjudication agreement, the court defers a final ruling in the case. Deferred prosecution involves delaying everything beyond the filing of a criminal complaint or indictment. If the defendant successfully completes the term of the agreement, the charges will be dismissed with no conviction. A defendant who completes a deferred prosecution agreement may be able to expunge the records of the case.

Probation also resembles parole, a conditional release from prison, in many ways. A parolee must abide by many of the same conditions as a person on probation.

During a probation period, a defendant must abide by conditions set by the court and avoid any additional criminal conduct. Conditions may include maintaining employment or, in juvenile cases, staying in school, meeting regularly with a probation officer, paying restitution, and submitting clean drug tests. Courts may order a defendant to participate in certain activities, such as community service, counseling, parenting classes, or substance abuse treatment.

Failure to meet any of these conditions could constitute a violation. The probation officer assigned to a defendant’s case makes regular reports to the court regarding the defendant’s progress, and he or she is often the person who decides whether to report something as a violation. Once a violation is reported, the prosecutor makes the next move.

The state must file a motion to revoke probation, with notice to the defendant and a request or order to appear in court. The case then proceeds much like the initial criminal case, with the state required to prove that a violation occurred and the court deciding the matter. One major difference is that, in most jurisdictions, the state must only prove a probation violation by a preponderance of the evidence, meaning a likelihood of more than 50 percent that a violation occurred. In most criminal cases, by contrast, the state must prove guilt beyond a reasonable doubt.

If a court decides that a defendant violated his or her probation, it has numerous options for sentencing. The decision may depend on the nature of the violation itself, the defendant’s history of probation violations, or the severity of the underlying offense. Possible sentences could include extension of the probation term, imposition of more community service or other additional probation terms, or a revocation of the probation, followed by service of the entire original sentence.

When a term of probation is violated, it’s no laughing matter. The penalties will vary depending on what occurred; however, a violation can mean a one way trip back to jail or the defendant’s sentence can be reinstated. After a probation violation, an arrest can follow shortly afterwards. What happens next will depend on your San Diego criminal defense attorney as well as your history. When deciding how to punish you, the judge will consider if you have any prior probation violations, the nature of the violation, any new criminal activity committed by you, any aggravating or mitigating circumstances and the seriousness of the probation violation.

Not all probation violations are within your control. You might have been at somebody’s house when the police were called, or an angry partner might have called the police on you with the intention of sending you back to jail even if you did nothing wrong. On the other hand, you may have accidentally violated a restraining order. Probation terms vary from person to person and so do the reasons for probation violations. If you had a perfectly valid reason or excuse for your violation, it will take a skillful attorney to present a convincing argument on your behalf. Otherwise, the judge can find you guilty and send you back to jail.

A probation violation can result in heavy fines, jail time and extended probation. If you violated your probation, it would be in your best interests to discuss your matter with an attorney as soon as possible. An experienced lawyer will know how to present your case in front of the prosecutor and the judge in a light that is more favorable to you. When your future is on the line, you need to do what you can to keep yourself out of jail and in the community where you belong.