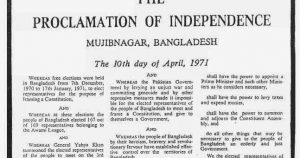 On the night of 25 March 1971, immediately before the military crackdown and moments before Bangabandhu Sheikh Mujibur Rahman was arrested by the Pakistan Army, he made a Declaration of Independence.  Following the announcement top AL leaders crossed over to India for safety.  By 30 March 1971, most of them were able to assemble in Kolkata and drafted the Proclamation of our Independence. Later on April 17, the official announcement declaring independence of Bangladesh by the Bangladesh government-in-exile was made.

In this proclamation, the background and reason for the struggle of independence was mentioned. The then Pakistani ruler declined to transfer power to the elected representatives of the people of this country, rather they started indiscriminate killing. They did not summon the session of the constituent assembly consisting of the members elected in 1970 general election where Awami League bagged 167 seats out of 169. President Yahya Khan without summoning the session scheduled on March 3, had postponed it for an indefinite period. And thereafter, initiated the operation Searchlight.

The basic law of Bangladesh is the constitution of the People’s Republic of Bangladesh, 1972 as amended from time to time. Till 1996, thirteen amendments have been made. All laws of the country are subordinate laws made by the elected Sangsad conforming to the tenets of the Constitution. The laws enacted by the legislature and now in operation regulate almost all spheres of life. Ordinarily executive authorities and statutory corporations cannot make any law, but can make by-laws to the extent authorized by the legislature. Such subordinate legislation is known as rules or regulations. Unless found ultra vires of the parent law, such rules or regulations are also enforceable by the court like the laws made by the legislature. Important laws of the country may be classified under some broad heads such as land and property laws, personal laws, commercial laws, labour and industrial laws, election laws, law of crimes, service laws, fiscal laws, press laws and laws relating to the remedies.

Following the military crackdown by the Pakistan army in Dhaka and elsewhere on 25 March 1971, top awami league leaders including some elected members of both National Assembly (MNA) and Provincial Assembly (MPA) crossed over to India for safety. By 30 March 1971, most of them were able to assemble in Kolkata. On 10 April 1971, the MNAs and MPAs who were able to meet together in Kolkata formed themselves into a constituent assembly in exile and drafted the Proclamation of Independence. The formal meeting of the constituent assembly was held on 17 April 1971 at Baidyanathtala (re-named Mujibnagar after the proclamation), a border area in present Meherpur district, where Yusuf Ali, an MNA formally read out the Proclamation of Independence at a simple ceremony. With this declaration the newly formed Constituent Assembly was proclaimed supreme and sovereign authority of Bangladesh. The Proclamation declared that the independence of Bangladesh be deemed to have come into effect from 26 March 1971. It also legalised the Mujibnagar government and gave direction to all involved in the War of Liberation for establishing the chain of command.

We the elected representatives of the people of Bangladesh, as honour bound by the mandate given tours byte people of Bangladesh whose will is supreme duly constituted ourselves into a Constituent Assembly an having held mutual consultations and in order to ensure for the people of Bangladesh equality human dignity and social justice. Declare and constitute Bangladesh tube a sovereign peoples Republic and thereby confirm the declaration of independence already made by Bangla Bandhu Sheikh Mujibur Rahman and do here by affirm and resolve that till such time as a Constitution is framed, Banga Bandhu Sheikh Mujibur Rahman shall be President of the Republic and that Syed Nazrul Islam shall be Vice President of the Republic and that the president shall be the Supreme Commander of all the Armed Forces of the Republic shall Exercise all Executive and Legislative powers such Republic including the power to appoint a Prime Minister and such other Ministers as he considers necessary, shall have the power to levy taxes and expend monies, shall have the power to summon and adjourn the Constituent assembly, and do all other things that may be necessary to give to the people of Bangladesh orderly and just Government.

In the exercise of power conferred by the Proclamation, the Acting President Syed Nazrul Islam issued the Laws Continuance Enforcement Order to ensure continuity of all the existing laws. The Vice President and Acting President of Bangladesh, in exercise of the powers conferred on me by the Proclamation of Independence dated tenth day of April, 1971 do hereby order that all laws that were in force in Bangladesh on 25th March, 1971, shall subject to the Proclamation aforesaid continue to be so in force with such consequential changes as may be necessary on account of the creation of the sovereign independent State of Bangladesh formed by the will of the people of Bangladesh and that all government officials – civil, military, judicial and diplomatic who take the oath of allegiance to Bangladesh shall continue in their offices on terms and conditions of service so long enjoyed by them and that all District Judges and District Magistrates, in the territory of Bangladesh and all diplomatic representatives elsewhere shall arrange to administer the oath of allegiance to all government officials within their jurisdiction. This order shall be deemed to have come into effect from 26th day of March, 1971.

This Presidential Order called the Provisional Constitution of Bangladesh order, 1972, was issued on 11 January, 1972. By virtue of this Order, the entire character of the Government was changed. The presidential form was substituted by form aiming t a Westminster type parliamentary system. However, the main provisions of the provisional constitution of Bangladesh order, 1972, are as follows: