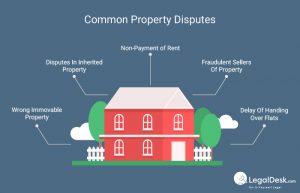 Property disputes come in many forms. Examples include individuals litigating the ownership rights of a property (land title), the location of the ownership line that separates them from one (land boundary), one’s right to use the land of another (easements), or even riparian or littoral boundaries.

Determining the interests and locations of each parcel when litigating property disputes often requires an extensive search of the Public Record for survey maps, survey plats, survey field notes, and property deeds.

Once the deeds, descriptions, and maps have been found and analyzed, modern technology such as total stations and Global Positioning Systems (GPS) allow the surveyor to accurately retrace the property boundaries.

The concept, idea or philosophy of property underlies all property law. In some jurisdictions, historically all property was owned by the monarch and it devolved through feudal land tenure or other feudal systems of loyalty and fealty.

Though the Napoleonic code was among the first government acts of modern times to introduce the notion of absolute ownership into statute, protection of personal property rights was present in medieval Islamic law and jurisprudence,[1] and in more feudalist forms in the common law courts of medieval and early modern England.

Contract of sale does not create any title to the vendee and hence a transferee under a sale deed cannot be restrained from enjoying possession of the property at the instance of a person claiming to have a previous agreement of sale in his favour. Defendant in a suit for specific performance may be restrained from transferring the suit property and making construction thereon by a third party during the pendency of the suit. However, it has been held that in a suit for specific performance an order of injunction restraining alienation is unnecessary as s.52 of the Transfer of Property Act is an adequate safeguard.

Favour by making the construction and the court would not in equity order demolition of the construction. The Appellate Division subsequently distinguished those cases and held that a cosharer cannot be permitted to go on making construction where he is possessing land in excess of his share. In Hashem Ali v. Begum Nurjahan, 9 MLR the Appellate Division held that the principle that in urban area no cosharer should be restrained by injunction from making construction is not applicable where the very right to construct is based on a deed which is tainted with fraud. Where a co-owner inducted a tenant in the premises without the consent of the other co-owner and the tenant runs a workshop without permission and license from Municipal Corporation, the court may restrain the tenant from running a workshop in the premises.

Waste, damage, alienation: An injunction can be granted if there is a real danger of the subject-matter of the suit being wasted, damaged or alienated by any party to the suit. But a mere allegation is not sufficient; there must be proof of actual or reasonably apprehended danger of such waste, damage or alienation. The question as to what constitutes sufficient danger depends upon facts and circumstances of each case. It is necessary to show some overt act towards alienation of the property such as negotiation or offer for sale should be alleged and proved.’

Wrongful sale of property- in execution of decree

Removal of property to defraud creditors

An injunction can be granted to restrain a threatened disposal of movable or immovable property in fraud of creditors. It can be granted even in a suit for money where the court is satisfied that the defendant threatens or intends to remove or dispose of his property which is wholly outside the scope of the suit. The plaintiff, of course, will have to prove by definite evidence the threat or intention to remove or dispose of the property to defraud the creditors.

The court should always be cautious and slow in interfering with the functioning of elective institutions and should be watchful not to allow abuse of the process of the court by persons who want to nullify the result of an election with the aid of an interim order of the court.