Dr Ravi Batra  gives an explanation for social behaviour in his book  The Great Depression of 1990 (pp31-35) . He uses Sarkar Law of Social Cycles. This theory was put foreword by an Indian  Scholar of the name Prabhat Ranjan Sarkar.

This social theory divides a society into four main power groups or ways of thinking. The power groups take turn in controlling that society. Effectively you have a cycle of four different social systems. This occurs in a fixed sequence based on human behaviour. Below is a table with the sequence of social systems.

Unfortunately true idealistic communism only lasts a decade or so before opportunistic Warriors  take military control over the labourers. Lenin came to power in the USSR based on a Labourer system. Within a decade Stalin who has a Warrior mentality took power. This then became a military dictatorship even though the rest of the world called it communism. China went through the same process after World War II. Its labourer system was replaced  by a military dictatorship within a decade or so.

A Capitalist cycle starts with the Intellectuals in power. These people create a moral  and bureaucratic base for future social growth to occur. Included with this group are the churches  and academics. The churches and the monarchy use each other to help maintain power. A common slogan is “God, King and Country”

The Intellectuals provide a solid foundation for successful commercialisation and industrial growth by the Acquisitors. There is usually an unfair sharing of wealth with the labourers. Displays of extravagance is common amongst the wealthy which causes resentment amongst the labourers. Included in this group are merchants, landowners, money lenders. Marriage between royalty and the wealthy is common.

As the wealth in society grows, workers needed by Acquisitors want a fair share of the wealth and better working conditions. Unions force a sharing of power between the Acquisitors and Labourers. Following this are civil rights movements  for the disadvantaged in society. A Democracy is then formed in the Capitalist system. There is an improvement in the availability of  education to the common person because the Acquisitors need educated Labourers.

Eventually the greed of the Unionists  and Capitalists causes economic collapse. The capitalists will try and return to the old system by decreasing the power of Unions but this won’t work because the Labourers have had a taste of the good life. There is an increase in serious crime and lack of discipline. Disunity occurs in society with individuals looking after their own selfish interests. These activities provide an opportunity for Warriors to take power. The warriors creates nationalism, unity and gun control by force. This era usually turns out to be some form of military dictatorship.

The warriors are not very good at economic management and have a tendency to be ruthless and uncaring. There may be some religious persecution because they see them as a future threat to their power. The hardship that the public experience gives an opportunity for the intellectuals to assume power. The common people who are suffering find comfort in the church. This gives the church more power. The cycle then starts again.

he whole cycle may take several hundred years. The social cycle will continue in sequence provided there are no external influence such as World War. Different countries may be in different parts of the cycle. Two countries which are good to study Social Cycle theory are Japan and Great Britain because they are isolated by water which has protected them from successful outside interference for a long period of time.

Social change can be shown as a clock and social growth as a building. The people in each society think they are moving forward. They don’t realise that they are going around in circles in the long term. 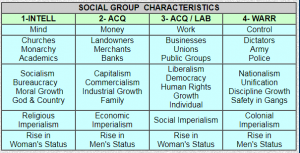