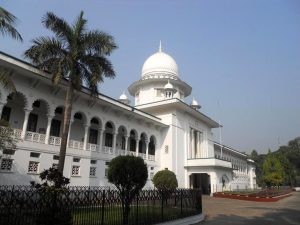 The doctrine of legitimate expectation was first developed in English law as a ground of judicial review in administrative law to protect a procedural or substantive interest when a public authority rescinds from a representation made to a person. It is based on the principles of natural justice and fairness, and seeks to prevent authorities from abusing power.

The doctrine of legitimate expectations is an emerging topic in Bangladesh. The Development of this doctrine is discussed below.

The doctrine of legitimate expectation in Bangladesh is a ground for filing writ petitions under Article 102 of the Constitution of Bangladesh. Writ petitions are an indirect system of judicial review in Bangladesh. Legitimate expectation concerns judicial review in administrative law. It is based on the principles of natural justice and fairness, and seeks to prevent abuse of power and Wednesbury irrationality, by public authorities. The doctrine of legitimate expectation seeks to protect a procedural or substantive interest when a public authority rescinds from a representation made to a person. A key facet of this doctrine is that a public authority must provide an explanation based on reasonable and fair grounds for its decision. The doctrine was firmly established by the English courts. The Supreme Court of Bangladesh began referring to the doctrine in 1987. It was expressly referred in judgement for the first time in 2000.

Although the doctrine of legitimate expectations has been relatively recent in making its appearance in Bangladesh, it has developed in Britain over the last situations thirty years.

The description of the leading case in this part will show that the following generate legitimate expectations and lead to the implication of a duty of procedural fairness when a decision is at the discretion of an administrative body. First, where the nature of the interest is such that the person has a right to expect that the privilege will continue (as in, for example, the case of a license), a hearing of some sort is required before the benefit can be withdrawn. Second, if the decision maker has made a representation that a procedure in accordance with natural justice will be followed, this will be respected. In addition, if there is a regular practice of according a hearing or other procedure, this procedure will be accorded in the future. Finally, if a representation is made that a certain decision will be made or certain criteria will be applied, the agency will be bound to accord natural justice to a person before applying different criteria or making a different decision. Nevertheless, the British cases have been careful to avoid specific definitions of what constitutes a legitimate expectation, so there has never been a clear, coherent judicial definition of the legal doctrine.

The first appearance of legitimate expectations was in the judgment of Lord Denning M.R. in Schmidt v. Secretary of State for Home Affairs.  The Home Office, which administered the Aliens Order, 1953 had a policy of according aliens studying at a “recognized educational establishment” a permit to live in Britain. The plaintiffs had been admitted to study at the Hubbard College of Scientology and were given permits to stay in the country for a certain period of time. The home secretary, because of concerns about Scientology, announced that the college would no longer be considered a “recognized educational establishment.” When the plaintiffs applied for renewal of their permits, they were refused. They alleged that this constituted a denial of natural justice, since they were not given a hearing before this decision was made.

Lord Denning emphasized that, since the plaintiffs to remain in the country “by license of the Crown.” He held that the duty to allow representations to be made “depends on whether [the plaintiff] has some right or interest, or, I would add, some legitimate expectation, of which it would not be fair to deprive him without hearing what he has to say.” In this case there was no legitimate expectation because the permits were for a limited time, which had expired. However, Lord Denning stated that the plaintiffs would have been entitled to a hearing if their permits had been revoked before they expired. Was this the case, they would have had a legitimate expectation of being allowed to remain in the country for the time specified which would have entitled them to a hearing. With these obiter comments, the doctrine was introduced into British administrative law.

Although the concept was not clearly defined, it was held that a legitimate expectation triggered the right to a hearing and to the protections of natural justice where a discretionary decision was being made.

Lord Denning outlined at least one situation where an expectation was legitimate—where a permit or license was given for a certain period and was withdrawn before its expiry.

What is Legitimate Expectation?

there is an express promise given by a public authority that there is a regular practice of certain thing which the claimant can reasonably expect to continue. It therefore follows that the concept of legitimate expectations consists of inculcating an expectation in the citizen that under certain rules and scheme he would continue to enjoy certain benefits of which he would not be deprived unless there is some overriding public interest to deprive him of such an expectation.

Legitimate expectation gives the applicant sufficient locus standi for judicial review and in most cases the legitimate expectation is confined to the right of a fair hearing before a decision which results in negativing a promise or withdrawing an undertaking is taken.  The theory of Legitimate Expectation marches into operation when there is an express promise from any Public Authority / Official that there is a regular practice of a certain thing, which the claimant can reasonably expect to continue. In other words, it consists of either inculcating anticipation in the citizen, or assuring him that under certain rules and schemes he would continue to reap certain benefits of which he would not be deprived unless there is some overriding public interest.

Source of both procedural and substantive rights

Lord Diplock, in the English case Council of Civil_Service Union v. Minister for Civil Service, has explained the doctrine, both in procedural and substantive contexts .

The representation should be on the lines of an express promise, or an established past action or settled conduct. It must be clear and unambiguous. It can be to an individual or to a class of persons.

The existence of the doctrine of substantive legitimate expectation in Bangladesh public law was accepted by the Court of Appeal in the case of Abdul Nasir bin Amer Hamsah v. Public Prosecutor.

The doctrine operates in the domain of public law and in an appropriate case constitutes substantive as well as procedural rights.

In National Buildings construction Corp v. Raghunathan, AIR 1998 SC 2779 Para 20 and Rabia Bashri Irene v. Bangladesh Biman 52 DLR 308 it is observed that, the doctrine can be invoked if the impugned decision affected a person either-

(a)  by altering rights or obligations of that person which are enforceable by or against him in private law; or

(b) by depriving of some benefit or advanced which either –

(i) he had in the past been permitted by the decision maker to enjoy which he can legitimately expect to continue to do until there has been communicated to him some rational grounds for withdrawing it on which he has been given an opportunity to comment; or

(ii) he has received some assurance from the decision maker that it will not be withdrawn without giving him first an opportunity of advancing reasons for contending that it should not be withdrawn.

The right to a hearing or to be consulted, or generally to put in one’s case may arise out of the action of the authority. Thus a promise made in the shape of a statement of policy or a procedure regularly adopted by the authority may give rise to what is called legitimate expectation, that is, expectation of a kind which the court now enforces.