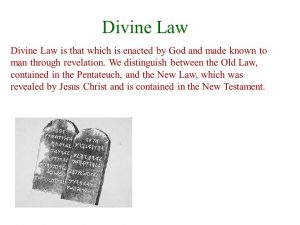 Divine Law is that which is enacted by God and made known to man through revelation. We distinguish between the Old Law, contained in the Pentateuch, and the New Law, which was revealed by Jesus Christ and is contained in the New Testament.

Of the many delusions that distort or have distorted the human interpretation of morality, one of the most deleterious and farfetched is the theory of divine law. This theory states very simply that right actions are those commanded by God and wrong actions are those forbidden by God. While this theory presumes the existence of God, I will not attempt to speak to this point. I will also refrain from mentioning the pragmatic problems of actually interpreting God’s commands and in putting a theory that relies on faith in to practice, since these objections are irrelevant to the truly and devoutly religious moral agent, as compelling as they may be to the atheist. In this essay I aim simply to show that if one adheres to the laws of logic, one cannot possibly simultaneously adhere to the doctrine of divine law, and that even a from a religious perspective, it makes sense to reject this theory. \n The theoretical advantages to the theory are relatively obvious. In one line it solves some of humanity’s largest questions. It tells us what to believe, (believe God’s commandments) why those beliefs are correct, (because God, a divine power, ordained them) and why we should be moral (because if not, there is an unpleasant surprise waiting for us in the afterlife). Despite these seemingly substantial advantages, when analyzed objectively, the theory is less than clear. Recorded in Plato’s Republic is the classic objection to divine law: as Socrates says, “Is conduct right because the gods command it, or do the gods command it because it is right?”\n As demonstrated by Socrates, the theory requires clarification, and expanded it proves to be ultimately groundless. As Socrates points out, the divine law theory cannot have it both ways: are actions right because God commands them or does God command them because they are right? Both seem to have impossible implications for the doctrine. \n Suppose that actions are right because God commands them. This principle presents a fundamental problem: it relies on circular logic. If things are right because God commands them then right action is defined solely in terms of what God commands—”right” is synonymous with “God commands.” So essentially, God commands actions because God commands them (a.k.a. they are right). The problem with this system of circular logic is that it makes God’s decisions into entirely arbitrary ones. If actions are right because God commands them then any action could be right, and there is no reason to praise God or to believe his decrees carry any advantages what so ever. God could just as easily attach moral value to murder and not to preserving life. So while God may always be right, there would be absolutely no reason to believe that he was “good,” a fundamental pillar of almost any religion that claims to interpret God. \n Many theologians respond to these criticisms by arguing that God would not attach moral value to murder, but this suggests that God commands actions because they are right.

…is universal and permanent. …guides us to become good people. EXAMPLES: The Code of Hammurabi. The Qur an. The 10 commandments.

However, this explanation again has crippling implications for divine law. If God commands actions because they are right, then there must be some standard to which God is appealing or judging himself by. This calls into question God’s divinity, and ultimately raises the question, to what standard must God, the almighty, appeal to? If there is some outside standard of right action then what is it and how is it derived? Either way this forces us to accept that right and wrong are entirely independent of God, a belief that runs contrary to the religious beliefs that would lead one to adopt the theory of divine law in the first place. Both interpretations seem to offer cursory and faulty justifications for God’s involvement in reality, and both seem to challenge the beliefs that religious moral agents must possess in order to follow an organized religion. (They either challenge God’s goodness or his infallibility) \n So what does this mean for religion-based morality? Luckily one of Catholicism’s greatest thinkers has an answer. St. Thomas Aquinas wrestling with similar philosophical inconsistencies developed an alternative: the doctrine of natural law. Aquinas theorized that God, as a perfectly rational creator, designed the world to operate on laws of nature and made us in his image by giving us the gift of rational faculties. He argued that these rational faculties were the key to right action and God gave them to us so that we could determine how to act. So in essence, natural law dictates that the right action is the one with the best reasons behind it—the moral life is the life lived “according to reason.” He writes in his Summa Theologica, “To disparage the dictate of reason is equivalent to condemning the command of God.” \n The doctrine of natural law seems to imply a similar relationship between God and morality as conventional thought has shaped between God and science. Science operates independently of God and allows humans to understand the world around them; similarly, morality is the study of how to act, according to reason, in our world. Masterfully, Aquinas has provided a way in which we can avoid the theoretical pitfalls of divine law, but maintain faith in God and his divinity. However, unfortunately, natural law punts us back to the proverbial square one of studies in morality and forces us again to consider the questions divine law so neatly and precisely put to rest. (i.e. what is right action, why is it right, why should I adopt the principles of right action etc.) So, unfortunately, even religion points us back to rationality, and even religious moral agents must think for themselves in order to both maintain their faith and to act morally.\n