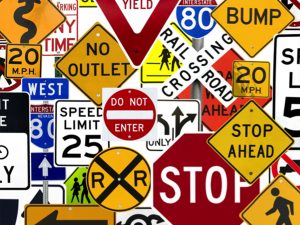 Like most motorists, you will likely get a traffic ticket or be stopped by the police at least once in your lifetime. Minor traffic violations such as speeding or double parking generally are classified as “infractions” that are not punishable by jail time. Most of the time, fines for traffic tickets can be paid through the mail without the need for legal representation. But for more serious traffic offenses, or when extra points on your license could lead to a suspension, it makes sense to consult with an attorney.

FindLaw’s Traffic Laws section covers everything from getting pulled over by police and having your vehicle searched, to understanding your rights and fighting a traffic ticket. This section also provides a state-by-state directory of traffic laws and DMV offices.

A Brief History of Traffic Laws

Cars were mostly a novelty when they were first introduced at the turn of the 20th century, so they generally followed the rules established for horse-drawn wagons and carriages. But cars quickly became popular, and dangerous, prompting the state of New York to require owners to register their vehicles in 1901. Other states followed suit and by 1920, all states required vehicles to have license plates. Most states required driver’s licenses by 1935, but only a few of them actually tested drivers.

Many of the traffic regulations we take for granted, such as stop signs and crosswalks for pedestrians, were suggested in William Eno’s 1903 book, “Rules of the Road.” He also advocated for slow traffic to remain on the right side and for cars to pass on the left, the use of one-way streets, and the construction of safety islands between opposing lanes of traffic. Many of his ideas were gradually adopted as states developed their own traffic codes.

While each state has its own traffic code, there are only slight variations from one state to the next on the major rules of the road. For example, all states use the same or similar types of traffic signs. But the maximum speed limit on freeways differs substantially from state to state, with one section of freeway in Texas boasting an 85 miles per hour limit. Below are some examples of common traffic law violations:

How an Attorney Can Help with a Traffic Violation

With many traffic violations, all you do is write a check and send it to your local traffic court. But sometimes it pays to hire a lawyer, depending on what’s at stake. Even a $50 ticket can be worth fighting if the points accrued would result in a license suspension, for instance. And even minor traffic tickets with negligible fines can result in a higher insurance premium, so you want to consider the overall consequence of your violation.

Generally speaking, you should consider hiring a lawyer for serious traffic offenses such as leaving the scene of an accident; reckless driving; and of course drunk driving. An attorney will be able to determine whether it makes sense to fight a traffic charge or just pay the fine.