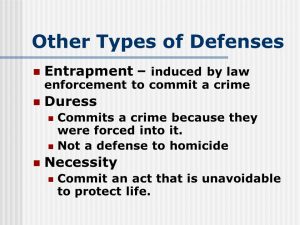 
Insanity
•    Accused cannot perform the Mens Rea of the offence or is not fit to stand trial.

To Prove Insanity you must:
•    Prove an illness/a disease of the mind
•    Prove the illness made them unable to understand the nature of their actions
•    The Accused proves insanity, not the Crown
•    Person not guilty because of insanity = mental institution (then released when not insane or indefinite confinement)

Intoxication
•    When someone is influenced by alcohol or drugs
•    Voluntary intoxication is not a defence
•    Allowed in General Intent cases; where the accused intended the to commit a criminal offence but not all the harm that resulted – assault and manslaughter
•    Not accepted for Specific Intent; where the accused needs to have intended the crime – murder, theft, robbery.

Self Defense and Defense of Property
•    To protect yourself, anyone under your protection, moveable property, your dwelling, and real property
•    May only use reasonable force to either prevent the assault or its repetition

Necessity
•    One is justified in breaking the law if they avoid a greater harm or achieve a greater good
•    Examples:  Self-defense and duress

Provocation
•    Something causes another person to lose his/her self control (i.e. an act or an insult)
•    Can reduce the charge but does not negate the offence.  (e.g. murder to manslaughter)

Entrapment
•    Accepted if the accused can demonstrate that they were “set-up” or trapped into doing something they otherwise would not have done.

Double Jeopardy
•    In order to promote justice and fairness society will not charge a person with the same crime twice.
•    Cases can be appealed but once the appeal process has been exhausted then the case is finished.

There are three ways for defendants to defend themselves in a criminal court:

Legal services for the poor

Most defendants can’t afford to hire their own private defense attorney. When defendants are legally indigent, the court is required to provide them with legal representation at government expense if jail or prison time is a possible sentence. In Gideon v. Wainwright (1963), the U.S. Supreme Court ruled that an indigent defendant charged in a state court with a felony has the right to counsel under the due process clause of the Fourteenth Amendment. In 1972 the Court ruled in Argersinger v. Hamlin that a defendant has the right to counsel at trial whenever he or she may be imprisoned for any offense, whether it is a felony or a misdemeanor. But indigent defendants are not always entitled to free legal representation. For example, those charged with minor traffic offenses are not entitled to free legal services.

How does one qualify for free legal services? Ordinarily, a defendant who wants legal counsel appointed at government expense must ask a judge to appoint an attorney and provide the court with information about his or her income and resources. Each state makes its own rules with respect to who is indigent.

More than 80 percent of the people in the U.S. who are accused of a felony use a publicly appointed defense attorney. The federal government and many states set up public defender offices. Typically, the chief public defender is an elected or appointed official who supervises assistant public defenders. Public defenders represent indigent defendants in criminal cases. In states that don’t have public defenders, most of the criminal cases are handled through an assigned counsel system. In such a system, the court appoints a private attorney to represent indigent defendants. A judge selects the attorney from a list established by the court, and the attorney’s fee is paid by the government with jurisdiction over a case. The contract system is used in a few counties, mainly in the western states. In this system, a law firm or lawyer is paid a set amount of money to handle indigents’ defense cases for a specified period.

Free legal defense services are generally underfunded because court‐appointed legal representation is politically unpopular. High caseloads for court‐appointed attorneys force them to pressure defendants to accept plea bargains. Public defenders in large offices in urban areas, for example, are likely to have close to two hundred felony cases per year. Another problem is that some court‐appointed attorneys are unlikely to take issue with judges’ decisions because they depend on judges for future appointments in cases involving indigents.

Private criminal defense lawyers practice on their own or in small partnerships. Typical private defense lawyers have several years of experience working for the government, some as prosecutors or public defenders, before going into private legal practice.

Private defense attorneys set their fees according to the complexity of the case and the attorney’s experience. If an attorney is experienced in criminal defense work and the defendant is facing felony charges, the fee will be higher than if the attorney is inexperienced and the defendant is facing misdemeanor charges. The median legal fee charged by lawyers in criminal cases was $1,500 in 1996. If this figure seems low, it’s because many cases require only one consultation and one court appearance by a lawyer. For cases that go to trial, defendants pay much more.

The defense bar is stratified, with a small cadre of highly publicized and highly skilled lawyers (for example, Johnnie Cochran, Roy Black, Alan Dershowitz, and F. Lee Bailey) handling only a few cases each year. These nationally known attorneys charge large fees and build their reputations representing famous clients. For most felony defendants who can afford to retain their own counsel, the private bar makes available a much larger group of attorneys in full‐time practice. These lawyers handle a large volume of criminal cases, negotiating pleas and trying to persuade their clients that they have made a good deal with the prosecution.

An important qualification to Gideon was made in Faretta v. California (1975), a case in which the Supreme Court established self‐representation in a criminal case as a right. A defendant who wants to represent himself or herself must knowingly and voluntarily waive the right to counsel and must demonstrate minimum qualifications to conduct his or her own trial. Few defendants are capable of effectively representing themselves.