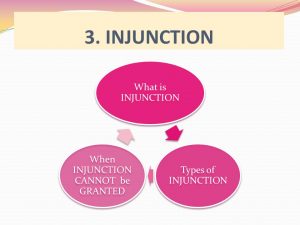 When the allegations made in the application are vague or indefinite, no injunction can issue. Equally, no injunction should issue in respect of a property description of which is vague and not specific. In order to get an order of injunction, the property in dispute should be clearly identified with specific area and demarcation. In a suit for declaration of title and partition, the decree holder cannot be restrained by injunction; the proper course would be to pray for stay of further proceedings if the decree is put into execution. No injunction can be granted in matters covered by a provision made in a special enactment.

In what cases Injunction cannot be granted

1. When plaintiff fails to prove the prima facie case of his title and possession.
2. Alternative remedy available by way of compensation.
3. Grant of injunction telling upon internal management of and disturbing its working.
4. Petitioner coming to court with unclean hands
5. Restraint order against payment of irrevocable letter of credit or bank guarantee particularly should not ordinarily be granted on account of its serious repercussion on international trade.
6. Restraining defendants from publishing any news item about plaintiff alleged malpractice.
7. Expired contract.
8. Offering of namaz with jamat or otherwise.
9. Plaintiff not claiming permanent injunction cannot claim grant of interim injunction.
10. Oral agreement.
11. Pecuniary compensation possible
12. Injunction not to be granted in violation of accepted principles of freedom of speech.
13. Grant of injunction is equitable relief, it is seldom granted when in opinion of court plaintiff is able to remedy his own grievance.
14. Suit for declaration and permanent injunction to safeguard construction where permission revocable at the option of licensor.
15. Keen struggle between parties is not ground of injunction.
16. Injunction should not be granted to suspend operation of decree to avoid frustration to the successful party.
17. Injunction not be granted to a person who comes to court with malafide intention or in aid of injustice.
18. Dispute between parties related to payment of specified amount court would take into account comparative inconvenience or mischief which is likely to be result from granting or refusing the same.
19. Violation of section 42 Land Revenue Act ca safely be expressed that applicant have no prima facie case.

An injunction cannot be granted

(a) to stay a judicial proceeding pending at the institution of the suit in which the injunction is sought, unless such restraint is necessary to prevent a multiplicity of proceedings;

(b) to stay proceedings in a Court not subordinate to that from which the injunction is sought;

(c) to restraint persons from applying to any legislative body;

(d) to interfere with the public duties of any department of the Government, or with the sovereign acts of Foreign Government;

(e) to stay proceedings in any criminal matter;

(f) to prevent the breach of a contract the performance of which would not be specifically enforced;

(g) to prevent, on the ground of nuisance, an act of which it is not reasonably clear that it will be a nuisance;

(h) to prevent a continuing breach in which the applicant has acquiesced;

(i) when equally efficacious relief can certainly be obtained by any other usual mode of proceeding except in case of breach of trust;

(j) when the conduct of the applicant on his agents has been such as to disentitle him to the assistance of the Court;

(k) where the applicant has no personal interest in the matter.

Injunction cannot be granted when it interferes with performance of public duties. As earlier stated, temporary injunction is to be refused where no relief of permanent injunction can be granted. Temporary injunction is not to be granted when the order would be in fructuous as the act sought to be restrained has already been done. No injunction is to be passed when the suit is prima facie barred by limitation as in such case the plaintiff cannot have a. prima facie case. The jurisdiction of granting injunction being an equitable jurisdiction, no injunction should be granted at the instance of the party who has not come with clean hand. The power of granting injunction should not be exercised when other equally efficacious remedy is available.

An injunction cannot be granted-

(a) to restrain any person from prosecuting a judicial proceeding pending at the institution of the suit in which the injunction is sought, unless such restraint is necessary to prevent a multiplicity of proceedings;

(b) to restrain any person from instituting or prosecuting any proceeding in a court not subordinate to that from which the injunction is sought;

(c) to restrain any person from applying to any legislative body;

(d) to restrain any person from instituting or prosecuting any proceeding in a criminal matter;

(e) to prevent the breach of a contract the performance of which would not be specifically enforced;

(f) to prevent, on the ground of nuisance, an act of which it is not reasonably clear that it will be a nuisance;

(g) to prevent a continuing breach in which the plaintiff has acquiesced;

(h) when equally efficacious relief can certainly be obtained by any other usual mode of proceeding except in case of breach of trust;

(i) when the conduct of the plaintiff or his agents has been such as to disentitle him to the assistance of the court;

(j) when the plaintiff has no personal interest in the matter.

No interim injunction can be granted when the suit is found prima facie barred by res judicature. However, in some decisions contrary view was taken laying down that at the interlocutory stage the court is only to consider whether triable issues have been raised by the plaintiff and whether there are substantial questions which need be investigated. It is submitted that where there is no doubt about the application of res judicata it cannot be said that the applicant has a prima facie case. On the other hand, when an applicant’s possession had been found in a previous litigation, he may be entitled to an order of injunction on the strength of the previous finding. Similarly, when in a previous litigation A has been found to be the true owner of the disputed property and not B, B cannot obtain an order temporary injunction against A. In view of the earlier decision in writ petition that the plaintiff had no title, his claim for temporary injunction in respect of the suit land is not maintainable.

Question of maintainability of suit in an application for temporary injunction

It has been held that the court is not required to look into maintainability of suit at the time of hearing injunction matter; it is to be decided after filing of the written statement and framing issue on the point. In another case, the same view has been taken that maintainability of a suit should not be gone into at the interlocutory stage particularly when there will be necessity of evidence at the trial of the suit for correctly deciding the issue. It is submitted that the principle is too broadly stated. It is true that the question of maintainability will have to be deferred when further evidence is required to decide the issue, but there may be cases where on the very face of it the suit is not maintainable and there cannot be any question of issuing temporary injunction. A plaintiff cannot have a prima facie case where the suit is ex facie not maintainable.